Pixel Art Design Notes - Wyatt (Once Upon a Time in Arad) 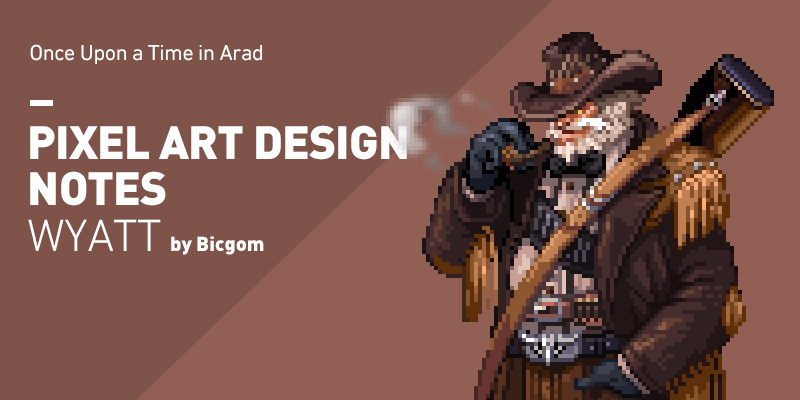 Greetings, adventurers!
This time, I would like to introduce you to the process of pixel art production in "Once Upon a Time in Arad", following the introduction of illustration notes from the last time.
I think there are lot of adventurers who are probably curious about the process of making pixel art designs.

I will introduce the pixel art craftsman who works pixel by pixel from now on. :

Hello. I am Bicgom who created the pixel animation of the Boss Wyatt, in the first original dungeon of "Once Upon a Time in Arad". I am very excited to greet you adventurers with my work.

Boss Wyatt, unlike the work I had done before, was a work that had that Western atmosphere.
Because of this, the work process was very fun and exciting.
So let me introduce to you, the adventurers, how the process of the animation of the Boss Wyatt went

First, based on the illustration work of the NSY, I set the size.
I set the sizes of the bosses of various sizes and fix the size together with the designers while comparing the avatars and monsters of "Once Upon a Time in Arad" together.

Based on the fixed size, I made a rough sketch.
I tried to follow the basic illustration as much as possible. In the early process, he even wore trumpet pants.

I made the detailed work based on the most suitable image among various rough sketches.
After several team meetings, I decided to develop the fourth draft design further. The big size and arrogant appearance of putting his hands in his pocket matched the image of the boss..

Although there are no original illustrations, I also created a pixel art of Wyatt without a hat on my own.
During this detailing process, I constantly talked with NSY to brush up the work. 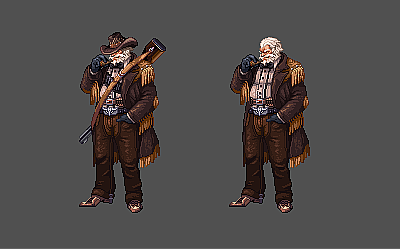 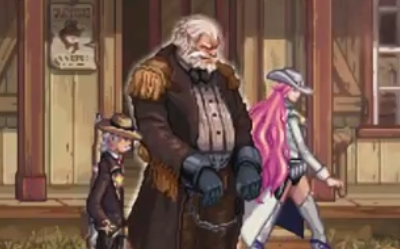 [I am not sure if you remember but unarmed Wyatt was shown in the '4:10 to Arden' dungeon while he was being transferred.]

Before I went into the animation work, I tried to draw a rough shooting position.

During such work I thought. "Let's get a real gun and take a picture of a real life posture!"
I bought a toy gun (with my money) and studied the poses and motions by holding it in a pose and taking pictures.
At that time, I shot with the toy gun in my office… I would like to take this chance to apologize to my colleagues. ^^;; 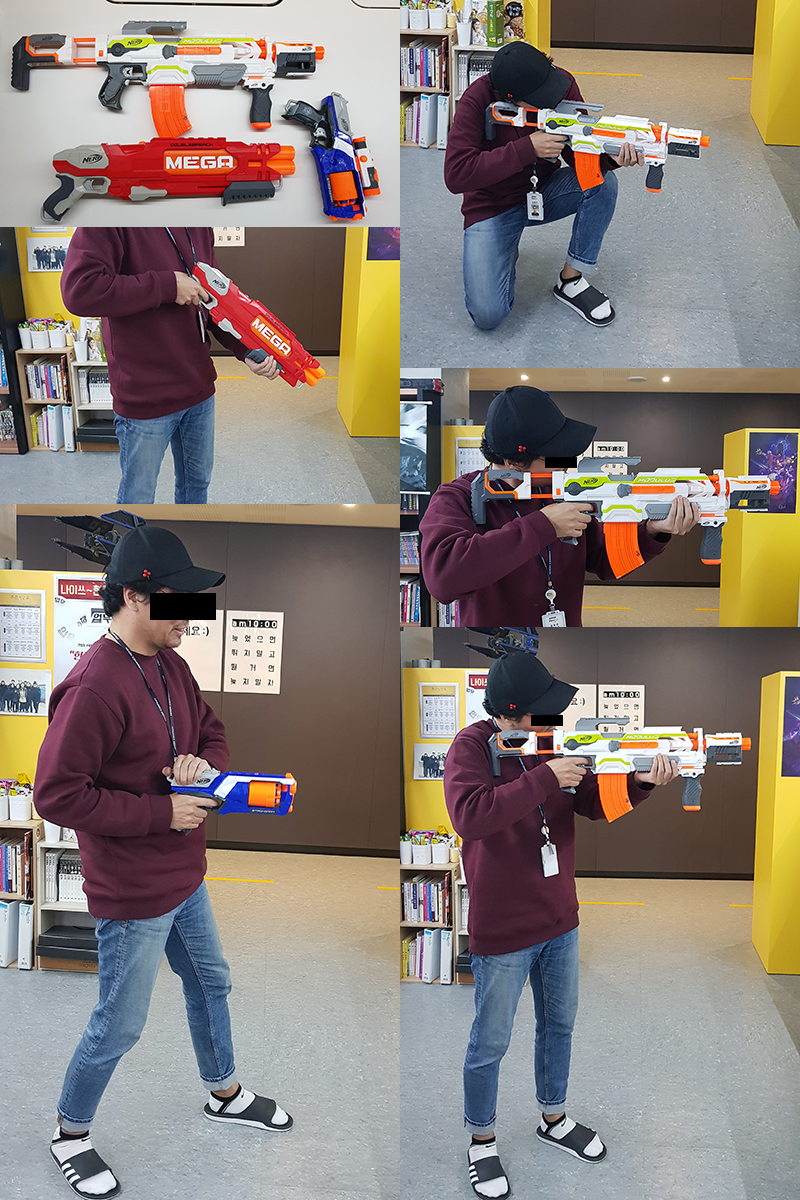 [I think it's best to try the poses yourself. 'ㅅ'b]

When you make a character, you have to create a motion that shows the character's tendency.
In the case of Wyatt, there was a concept of him enjoying alcohol and tobacco, so this characteristic was reflected in the motion production. 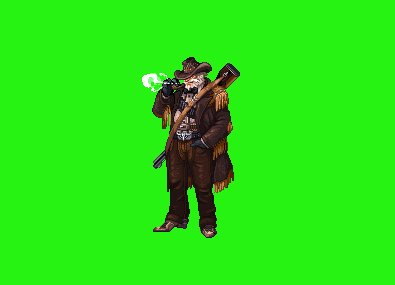 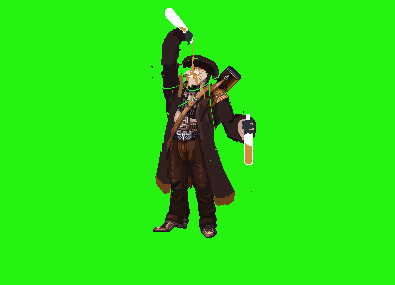 After a lot of modifications, the following motion had come out.
I took the pose myself and worked on the dummy animation needed for the actual work. As you can see, there are many postures that are not used in the actual work.

After the approximate motion draft design came out, I started working on the details.
The detailed work is done by looking at the output from the actual game, and in this process, I carefully checked whether there were any incorrect or insufficient operations.
So sometimes motion that did not exist in the final project are created, and motions that existed before are removed.

[This is a motion developed by putting the initial motion into the real game.]

I added some effects to the finished work to make it feel more colorful and strong. 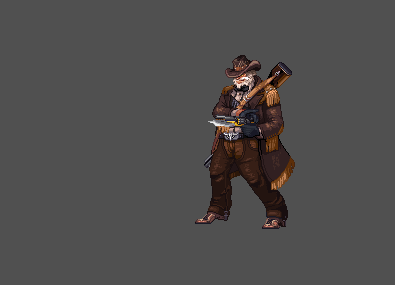 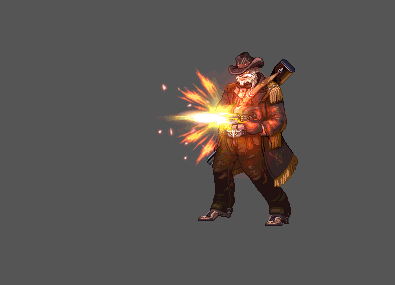 [An effect was added for when the pistol is fired.] 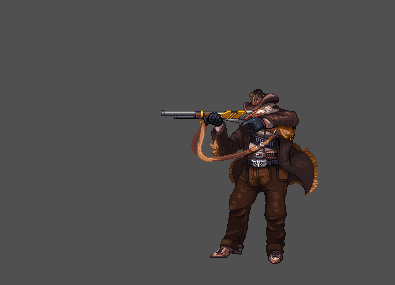 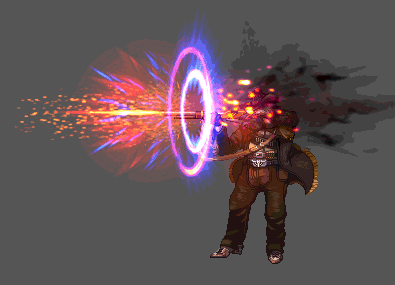 [Likewise, effects have been added to the shotgun.] 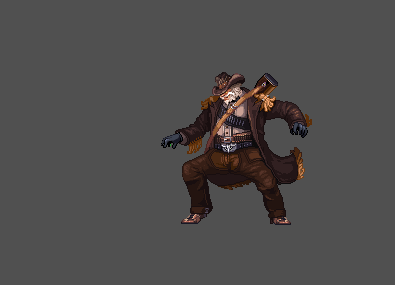 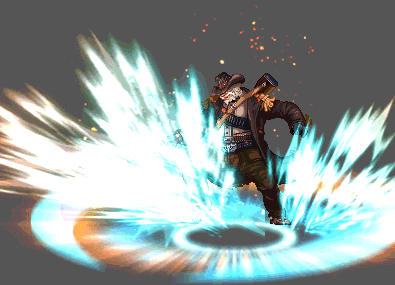 [I was working carefully  because the feeling of the stepping motion also greatly depended on which effects I would put.]

[This is the final motion of Wyatt.]

[Compared to the previous work, it feels different.]

I also worked on the production of Varracht and Wyatt, the last battle scenes of the 'Train Chase' dungeon.
This scene was a very important scene to decorate the end of the dungeon story with, so I thought a lot about how to create tension in the men's fight.
Especially, these kind of scenes have never been implemented in DFO, so I remember I had a lot of fun while working on it. :D

[This is a drafting design for a dual combat scene.]

In the actual scene, I excluded the cartoon-like directing from the early stage as above, and I worked on the film-like directing more.
In fact, when the light passes through the darkness, the shadow does not move like that, but I tried to express the tense state by emphasizing the movement of the shadow for a more dramatic expression.

[This is the final completed duel rendering motion. Bang Bang!]

It was a burden to work on the dungeon boss, but because of this opportunity, I bought a toy gun and in the end it was a very fun task. Also, because you enjoyed it, I feel rewarded and joyful. I will be greeting you with some of my more advanced works in the future.
Thank you for reading. ^^