Back to main #1. The Chase #2. Another Hatching

"The leader of the Fiends has disappeared," said Doghead in a calm voice.

Sniff Kei lifted his eyes from the pile of documents in front of him and stared at the woman who had barged into his office. The leader of Dog Leash, even though he already had received the report, feigned surprise. He hadn't survived in Kashipa this long without learning a trick or two. Sometimes, feigning ignorance was safer than admitting what you knew.

Secretly hoping for some new information, he waited for a response from Doghead, Kashipa's second-in-command. Without a word, she produced a smoking pipe from her jacket and lit it. The smoke escaped her mouth with a gentle sigh and formed the shape of a dog before it dissipated.

"Because of the ruckus at the Casino, isn't it? That place is so thoroughly destroyed that it'll take an army of men to find any usable traces."

Without a response, Doghead continued to stare at Sniff. Those eyes of hers. Deep as the abyss and just as impossible to read anything in it, they were the reason the other executives were wary of Doghead. After a quick glance into her scrutinizing eyes, Sniff Kei turned his head in spite of himself. His fisted hands felt clammy with sweat.

Finally, she spoke and Sniff's eyes lit up.

"There are traces of the Apostle's egg left in the place connected to the secret passageway. Find Ricardo, and collect the egg."

The Apostle's egg! Yom, the owner of the Royal Casino that once took up at least half of Pandemonium's wealth, risked everything to get ahold of that thing. Here, where the survival of the fittest ruled, just the fact that it contained so much mana made everyone greedy for it. Sniff felt his heart racing with excitement for the first time after so long. But unlike Yom, Sniff wasn't stupid enough to want something that could get him killed. He was only excited for the prospect of going after something that everyone wanted.

"But Niu the Chaser and her outsider friends are there," said Sniff, his face slightly red from his barely contained excitement. "Things will get complicated if they decide to interfere with us."

"The Royal Messenger is already on it." Doghead's smoking pipe let out another plume of smoke. "He's dispatched three combat and looting units."

Sniff's voice went slightly higher. The infamous powers of Kashipa that the Pandemonians were afraid of mostly came from its executives with Abyss implants. However, the actual driving force of this giant organization was the lower-ranking members, such as in the combat and looting units. The Royal Messenger sent out half of the forces remaining after the ruckus at the Royal Casino. Instead of clarifying his question, Doghead exhaled a long puff of smoke for one last time, and then put her smoking pipe back into her jacket.

"We don't have time. The other organizations have smelled it, too. We'd better move before it attracts more flies."

"Got it. I'll mobilize Dog Leash."

Doghead slightly nodded her head as she turned her body.

"What if Ricardo doesn't cooperate?"

"Then, follow the rules of Dog Leash," answered Doghead after a short silence.

After she left, the thick wooden door of his office closed on its own. Left alone in the dark, the leader of Dog Leash smiled.

Sniff was touching the ground, looking thoughtful. He looked as if he was searching for something, but touching the ground was his habit when things didn't go as he wanted.
Sniff believed that patience was the greatest virtue of a tracker. He'd been a successful tracker who never missed his target, but this time, he couldn't help but feel impatient, just like the first time he went on a chase. It'd been three days since he received Doghead's order. He'd mobilized everyone he could to track down Ricardo day and night. Doghead wasn't lying when she said other organizations were watching him. Several times, Sniff felt eyes watching him from the distance as he followed the traces of mana that were fading away.
I bet they belonged to the stuffy Terra Cotta, or the Ancient Library, whose members could even dig up corpses to satisfy their curiosity. Doghead said Walkman was on the Guardians or the Circle Mages that always interfered with them, but he couldn't be everywhere at once. At any other times, he would've followed them to the ends of Harlem, but not this time. Ricardo was his priority.

The traces found in Dark City had led them to the tall, bleak-looking spires of Skyscraper. Sniff's men, who marched into the mist of Nighttime Skyscraper in groups, hadn't returned. They were the pick of the litter, trained assassins of Dog Leash. They were only second to their combatant comrades where killing was concerned.
Sniff glared up at the sky illuminated by the ominous light from the unfamiliar golden star. It looked bigger than the last time he saw it. If it weren't for the monsters that came over from that planet and had occupied Nighttime Skyscraper, his efforts over the last three days would've come to fruition already. All Ricardo's traces that he'd found led into Nighttime Skyscraper. None of them led back out.

"What should we do?"

Sniff turned his head to the side. His short-haired adjutant was looking at him. His anxiety was clearly visible in his expression in his grim face.

"What do you think? We didn't come this far for nothing,"

Sniff nervously combed his hair. He could feel the dozens of eyes that were silently urging him from behind. If he ran away now, he'd lose the leash on his power and be bitten to death, just like the former leader of Dog Leash, whom he sent to join the environmental mana after his successful Abyss implant.

"Pair up. We'll scatter and converge."

The closer they got to the center, the thicker the mist. It was not long after they entered the mist that they realized something was wrong. Sniff heard a familiar voice screaming not far away from him. He couldn't see where it was coming from, but it was his adjutant's voice. As if on cue, something jumped out of the mist that seemed harmless a second ago. Sniff instinctively rolled forward, away from the attacker. He felt sharp claws tearing chunks of flesh off his shoulder. Ignoring the pain, he swung his enchanted staff. A painful howl echoed in the air as something hit the ground like a kite after its string snapped. He looked at his attacker, a monstrous combination of a quadruped and a bird. It was bleeding from the stomach where his staff struck, its two sets of legs and a set of wings flapping feebly in vain effort to fly away.

One of his men behind him yelled. This fool! Sniff instantly pulled him toward him, and instead of covering his mouth, he chose to throw him where he suspected danger lurked. Confusion flashed across the man's face before he disappeared into the mist, and soon a blood-curdling scream followed. Sniff quickly moved away, taking cover in the shadows of Nighttime Skyscraper, and looked back to where he was a moment ago. Monsters were coming out of the mist in droves. Now, painful screams rang out from everywhere, sometimes even near him. Leaving his dying men behind, Sniff hurried to the center of Nighttime Skyscraper. He had to move before these bloodthirsty monsters discovered him.

Sniff constantly wiped away his sweat and breathed deeply. It seemed every breath he took made his lungs feel hotter. He could tell the mana that he'd detected was moving toward the center of Nighttime Skyscraper. Several times, he encountered monsters, but he managed to avoid them by suppressing his mana and moving as quietly as possible. The closer he got to the center of the place, the stronger the mana and the heat became. It burned his skin through the thin mana barrier he cast to protect himself.

Sniff's feet that had silently glided across the ground finally stopped. Leaning against the shadows cast over the collapsed wall, Sniff barely stopped himself from gasping.

Finally, the Apostle's egg was right before his eyes. It was shining brightly through the thick shadows in Nighttime Skyscraper. And it wasn't alone. 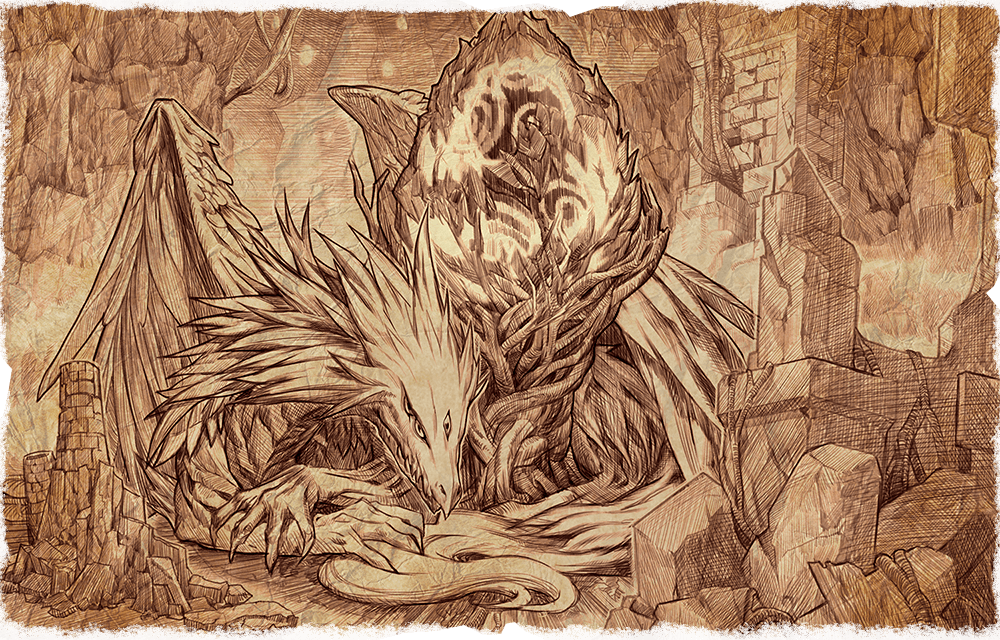 A gigantic monster resembling a dragon was nearby, protecting the egg as a dragon would its treasures. Its red feathers simmer with heat, and even its breath was as hot as a flaming furnace. It was apparent that this monster was the cause of the unbearable heat.

Sniff had found the egg, but Ricardo was nowhere in sight. There were, however, fine mists of someone's blood on the ground and walls.

What do I do now? Sniff was perturbed. The monster guarding the egg was radiating an alarming amount of mana.
I wish I had at least one man left, to distract it. I could've run away with the egg in the meantime. Sniff was so absorbed in his thoughts that he momentarily forgot about his enemy.
He lifted his head, having noticed the overwhelming heat on his skin. Instantly, his sight was filled with red as he felt his body being violently thrown onto the ground.

Next Episode: #2. Another Hatching