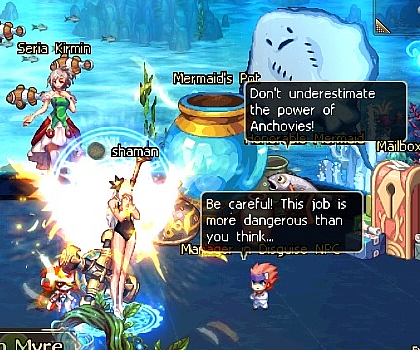 A new sport has taken Arad by storm, it is called Creature Brawl.

The founder of the brawl wanted to prove that creatures are not just cute companions but also powerful warriors that can hold their own.

Many creatures have gathered from all over Arad to participate in the brawl. For pride, honor, skill and most of all, to get rid of the stigma of only being called CUTE!

Impress by the vigor and excitement surrounding the brawl, an adventurer decided to register his creature companion to participate in the brawl but his creature seems sad and hesitant.

"What's the matter"
the adventurer asked.

"Haven't you heard? There is a terrible rumor surrounding the brawl"
replied the creature.

Shocked! The adventurer was lost for words on what he just heard while his creature companion continued.

"It is also rumored that creatures who've been badly hurt and brawled for too long are abandoned in boxes since they can no longer return to normal society".

"Worse! I've heard my long lost friend whom I've been searching for so long has been spotted in the brawl"

Tears started swelling up in the creatures eyes, sadness and pain covered his face. The creature looked up to his adventurer and said
"Will you help me save my friend?"

Feeling the sincerity of his creature, the adventurer could not deny such a noble request.

"Do not worry my friend, I will help you in your quest"

Find 'Unethical Manager' in Hendon Myre.
You can also enter through the "Manager in Disguise" in Seria's Room.

① Participant:
All characters will be transformed to a creature with equal skill and attack power upon participation.

② Controls:
Controls are the same for everyone except for creators.
Creator's will use W,S,D,A to move and mouse to attack.

③ How to Play:

Control your character and eliminate other users and AI creatures. There is a five minute time limit. Game ends when the time runs out, when you run out of HP or when all creatures are eliminated.

Random Item Box will spawn periodically on the map. Random Item Box contains 1 of 8 possible items. If you get an item you already have, it will not be registered in the quick slot.

As time passes, creature's attack will increase and poison gas will be released from all sides.