Test your EPIC luck by playing Rock-Paper-Scissors against Memet.
If you win, Hell Monsters will appear with DOUBLE epic drop rate!

● Period : FEB 21-MAR 07, 2017(UTC) until maintenance
● Target: Characters who can activate Hell Mode in Power Station, Castle of the Dead and Metro Center.

HOW TO MEET MEMET

When you are ready, click on DOUBLE button to activate Double Hell Mode in dungeon selection screen.

When hell monsters are defeated, Memet will appear with Rock-Paper-Scissors board.

HOW TO PLAY ROCK-PAPER-SCISSORS 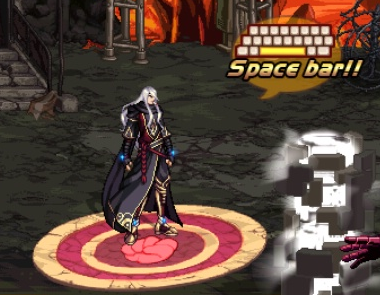 Make your choice by standing on one of the board and press SPACE BAR to confirm. You have 30 seconds! One of the following will be activated according to the result of Rock-Paper-Scissors game.

Red Memet has a higher chance of choosing ROCK.

Green Memet has a higher chance of choosing PAPER.

Blue Memet has a higher chance of choosing SCISSORS.

Don't be sad because you've lost at Rock-Paper-Scissors!
You can exchange Double Hell Tokens for valuable items at Little Memet's shop!