Greetings DFO Adventurers! :)
We are proud to present the DFO WEB STORE that will be open for business starting from NOV 17, 2020!

■ What is the DFO WEB STORE?

Through the DFO WEB STORE, you will now be able to purchase various CERA items, Avatars, and Packages that could previously only be bought in the CERA Shop, including Packages, Avatars, and Consumables/Contracts that are either account-bound or untradable.
Additionally, both seasonal and limited special promotions will be held in the DFO WEB STORE's very own EVENT menu! 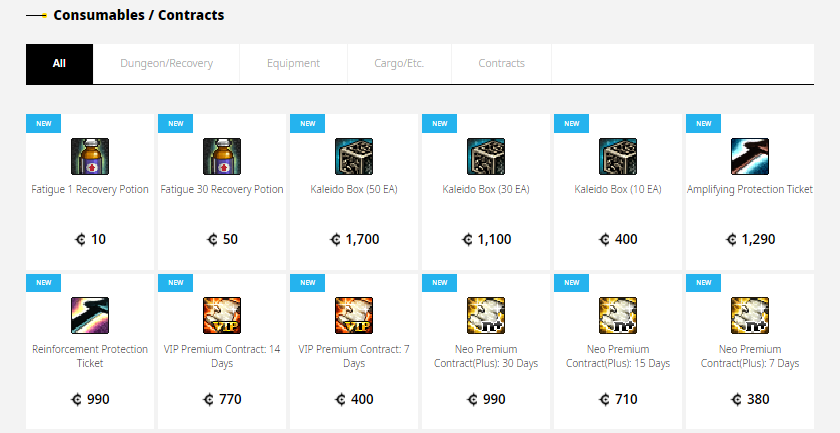 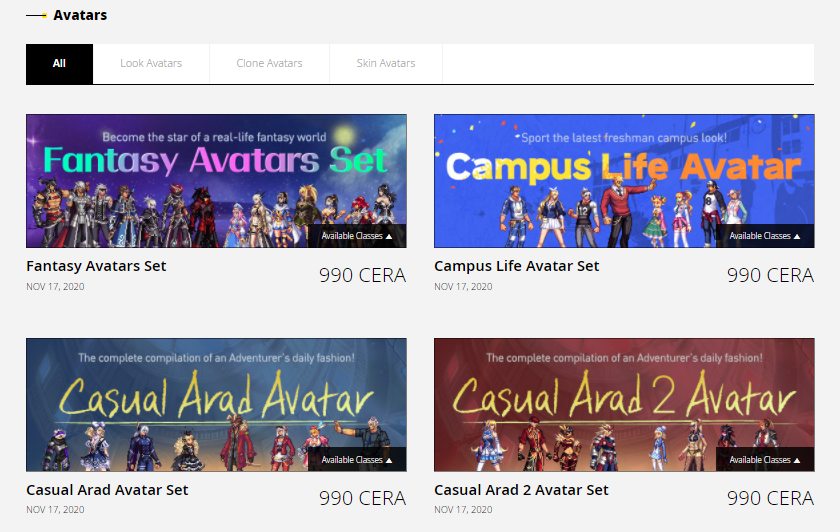 ■ DFO Web Store is a store that was initially designed with new Adventurers in mind.

Although some of our more veteran DFO Adventurers may not have known, there were quests called "Seria's Request".
New Adventurers had to clear these quests in order for their accounts to be eligible to purchase CERA.

However, because of the difficulty of these quests, some beginning Adventurers had trouble clearing them and consequently could not buy CERA items.
Adventurers who accessed DFO through Steam accounts would have experienced even more frustration when purchasing CERA items because of the lack of access to prepaid purchase methods such as Karma Koin.

In order to address these issues, we created the DFO Web Store for our beginning Adventurers so they could enjoy DFO to the fullest immediately and without any frustration.
(It goes without saying that the "Seria's Request" quests no longer have to be cleared!)

As the Web Store was created with newer Adventurers in mind, most items we have prepared are items that are helpful in the early character leveling phases.
However, we are planning to expand our wares based on feedback from all our Adventurers, so try out the DFO Web Store and let us know what you think!

Although the foundation of the DFO Web Store was laid out for beginning Adventurers, we have also prepared some aspects for more experienced Adventurers as well.

The Event menu in the DFO Web Store will hold both seasonal and limited promotions for original players.
We have prepared our first promotion for Platinum and Diamond Privilege Adventurers who have shown their love and support for DFO.

Adventurers who achieve Platinum Privilege during the promotion period can obtain a Guide of Wisdom Ticket Generator, and those who achieve Diamond Privilege can additionally receive a limited edition Special Weapon Avatar and Aura, all for free!

It may be but a small token of gratitude compared to the support you have shown us, but we hope that you enjoy this promotion.
We promise to present more diverse and generous benefits in the future!

As mentioned previously, access to purchasing CERA and CERA payment limits were based on the clearance of "Seria's Request" quests.

However, as all Adventurers can now purchase CERA and CERA items immediately through the DFO Web Store after registering an account, all "Seria's Request" quests will be deleted as of the NOV 17 maintenance.
All quest items related to these quests in Adventurers' possession will also be deleted on the NOV 17 maintenance.
Adventurers who were in the process of clearing "Seria's Request" will be allocated their Privileges according to the new DFO Store Privilege system.

■ Changes in registering through Steam

If you continue experiencing login or purchase restrictions while using a Steam account after the NOV 17 maintenance, please send us a 1:1 inquiry ticket.

DFO Store Privilege will also differ depending on whether an account has been made through Neople or Steam.
The differences in Privilege based on account type are as follows. 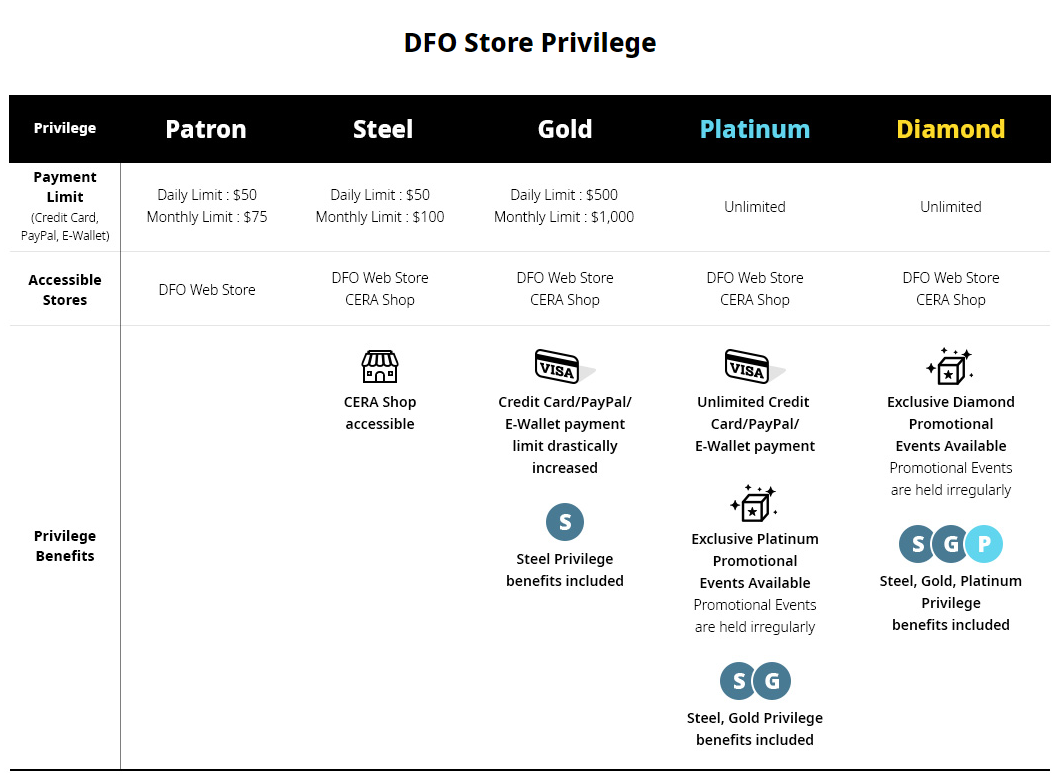 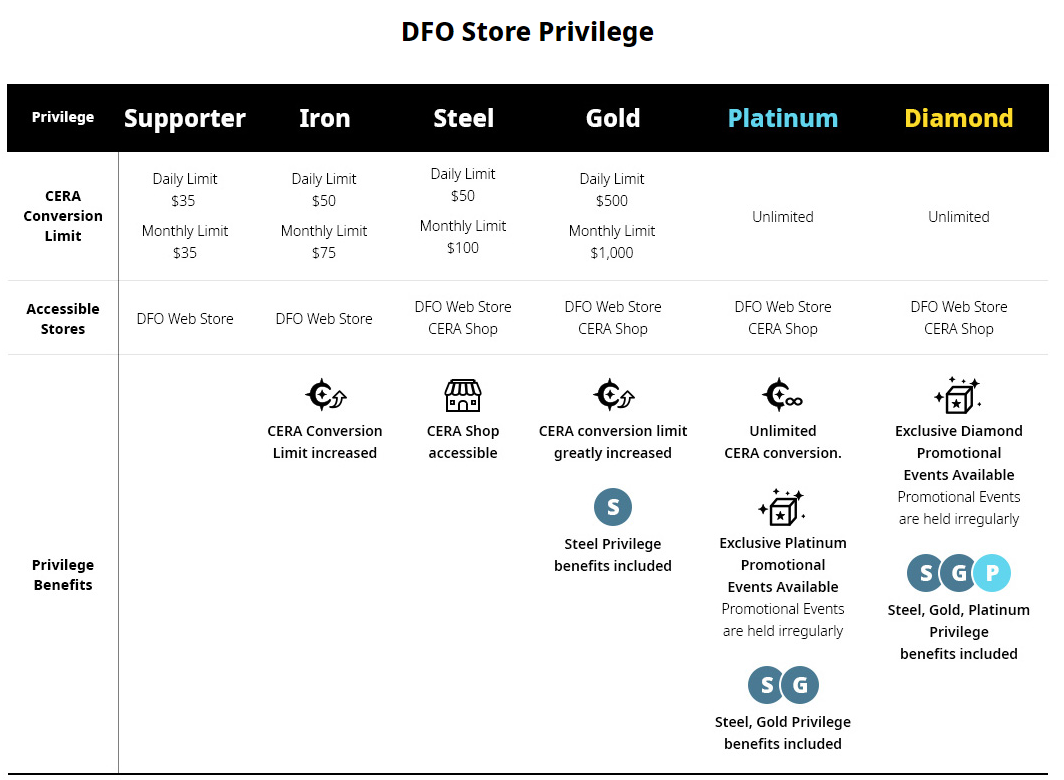 You can check your current Privilege status as well as qualifications for each Privilege within the My Privilege menu located in the DFO Web Store.

We hope these changes made in response to your feedback will help alleviate frustrations regarding CERA payment and allow Adventurers to enjoy DFO to the fullest.

It just so happens that we are holding a Level-up event along with the Male Priest Neo: Awakening update, so we hope that Adventurers, both new and experienced, will have fun playing DFO!