Illustration Notes - Sheriff, Kid (Once Upon a Time in Arad) 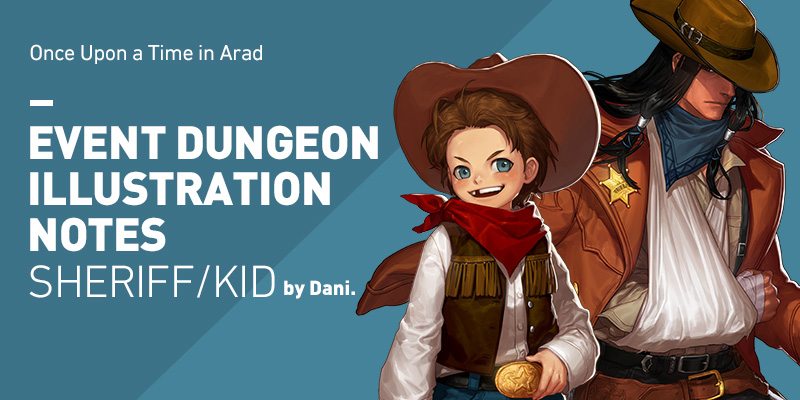 It's been almost a month since our very first exclusive DFO dungeon, 'Once Upon a Time in Arad' has ended.
Some of the most epic illustrations were showcased in this dungeon and we thought it would be nice to share with you the making process as well as comments of its creators!

Since there may be many adventurers who had been wondering about the story behind the development of 'Once Upon a Time in Arad,'
I hope to answer some of those questions by showing a little bit of content. Let's begin the series with notes from Dani, our graphics team member and the designer of the Sheriff and the kid!

Hello, I am Dani. I painted an illustration of the Sheriff and the kid NPC for the 'Once Upon a Time in Arad' dungeon.
It is a great honor to have an opportunity to introduce my illustrations. (Tears of joy)
Since it was the first exclusive dungeon of DFO, I spent a lot of time and effort in creating the illustrations.
I hope you have all been satisfied!

I wanted to decide the sheriff's characteristics first. His age is in the early thirties, and he is a stubborn and a righteous man. He rides his horse and he hurt his arm beating the villain boss.

Based on this content, I drew a proof of concept.

I painted the injured arm of the sheriff to be in a prominent position so that we could easily see it, and I was careful to show the badge so that people knew he was a sheriff. The first of these was selected and the illustration work progressed.
(I also liked the first one the most. :))

Based on a rough sketch, I sketched a more detailed illustration. 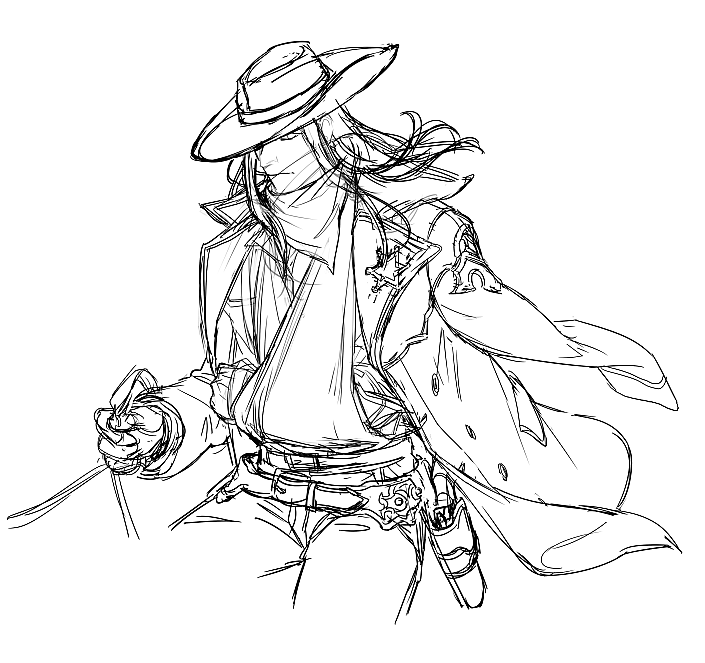 [In the process, I put a little more detail on the accessories and other various parts.] 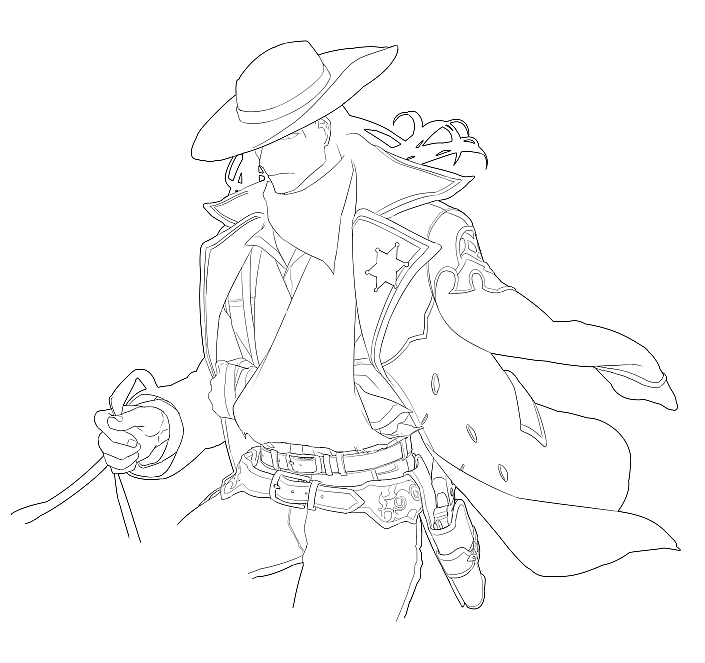 [Then, the lines were neatly arranged.]

To know the approximate feel, I colored the illustration considering the resulting lights and shadows. 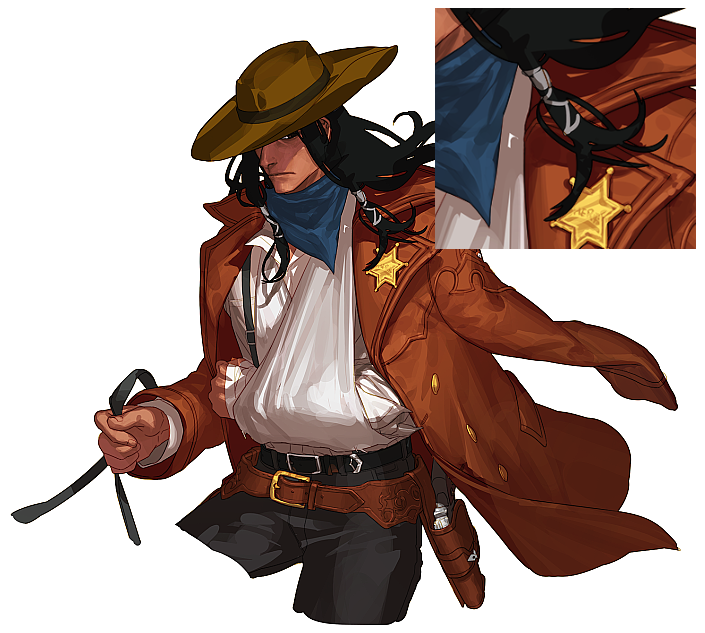 [In the process, an accessory was added to the sheriff's hair.] 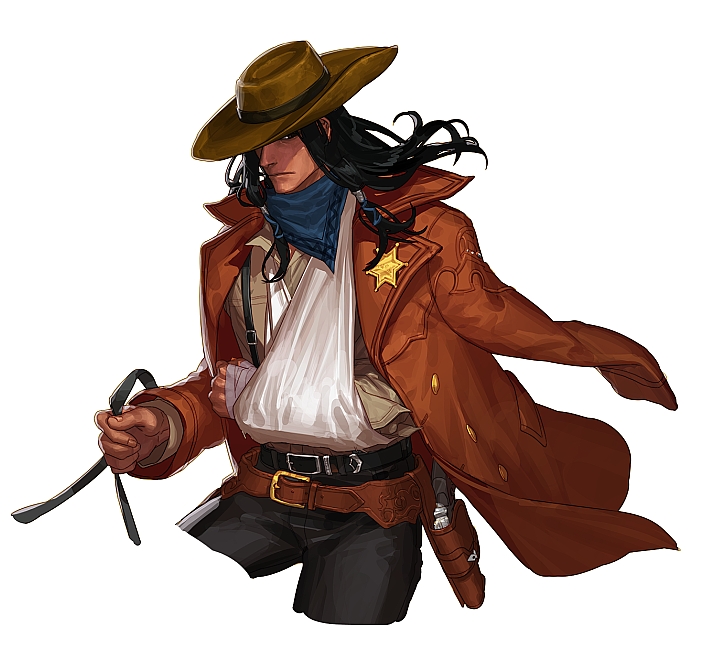 [I painted it progressively piling up the details on the character.] 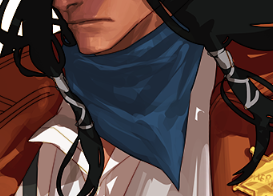 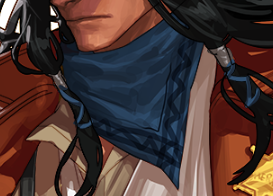 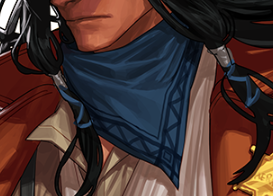 [The muffler seemed to have a feeling of flatness, so I added some patterns on the rim.]

[I put my efforts into detailing everything.
To make it easier for you to understand the changes, I have made this GIF image.]

For a more natural look, I did some final trimming work. 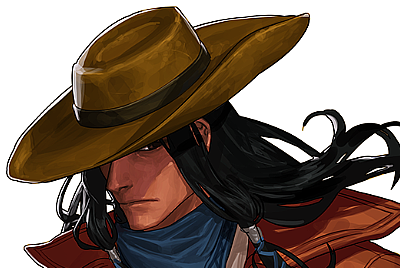 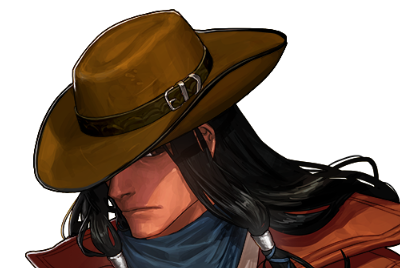 [I modified the shape of the hat for it to be more natural and corrected his hair.] 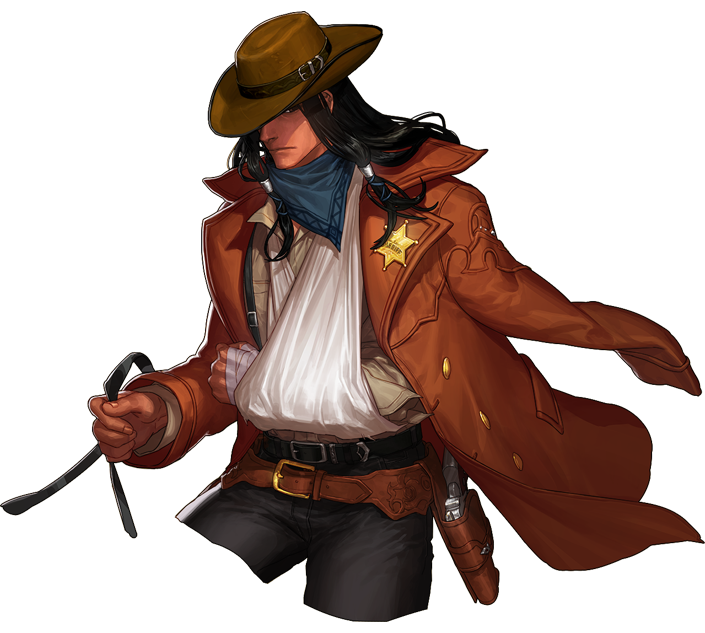 [In order to express the smearing light in a bright place, I added an effect with a brush and finished it.]
▶ See original illustration

This boy is a little cowboy who admires the sheriff, The players who have cleared up to the final dungeon know that he is Varracht's childhood form. With this special story, the kid's hairstyle was created with the reference to the present state of Varracht. I tried to imagine and portray his childhood.

After thinking for a while, I decided to refer to the face of Varracht's youthful days,
but to draw his costumes differently. As a result, this kind of draft was what came out. 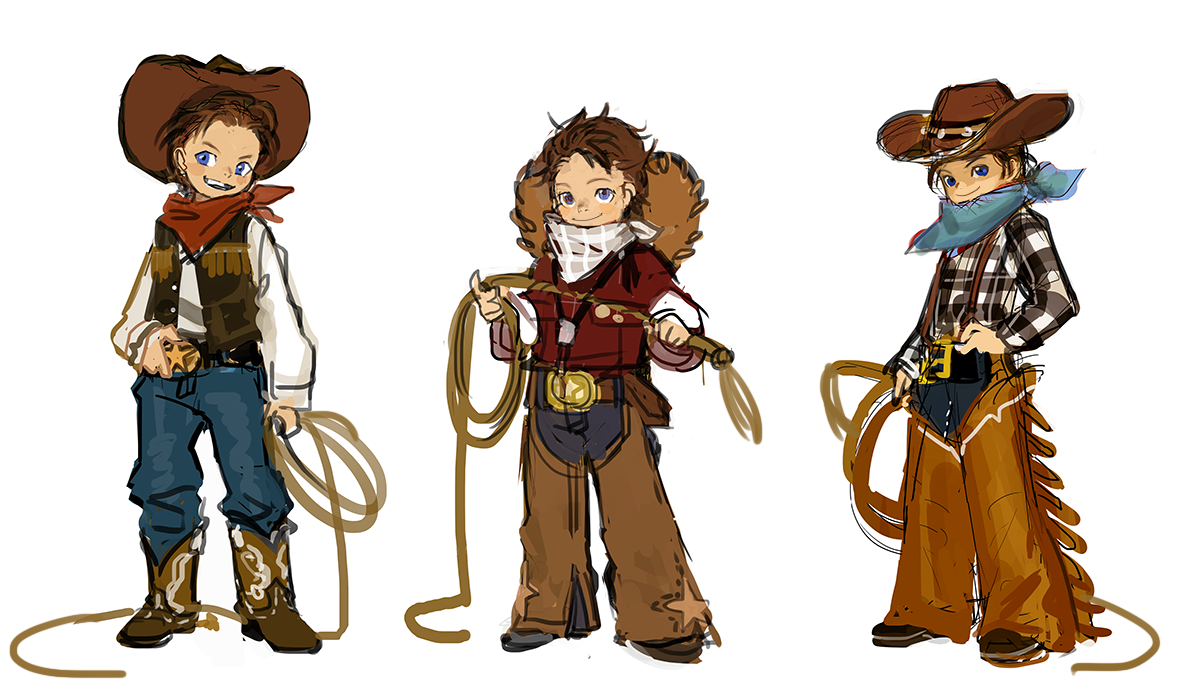 [Can you feel the prankster cowboy?]

After many meetings and discussions, the leftmost figure was the chosen one.

I sketched along on the draft, briefly finished the line work, and gave it simple colors.
It was the process of creating a whole image of how the whole picture would be completed. 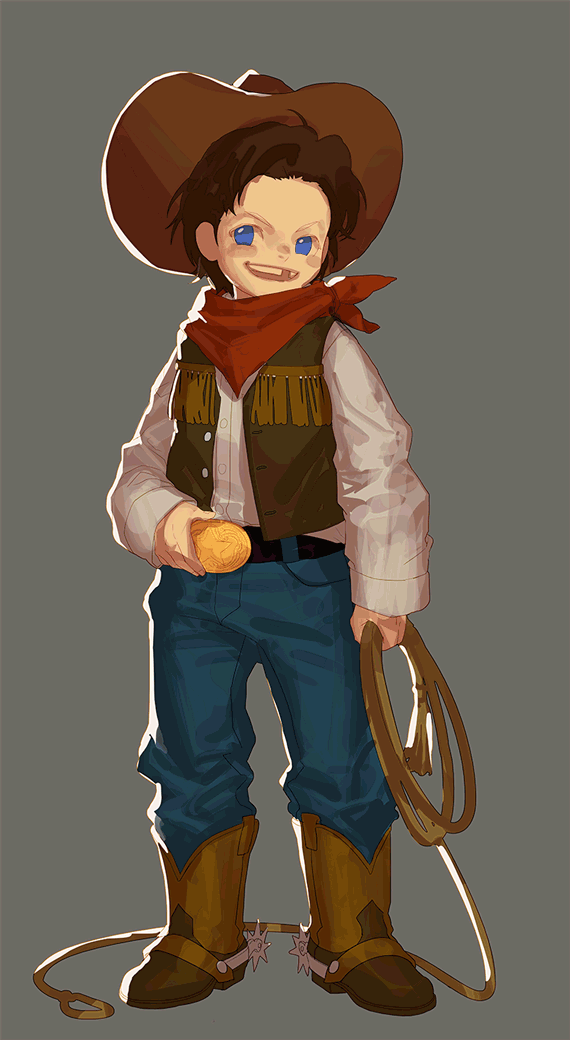 I painted the overall color and then started detailing the shirt, the pants and so on.
This little boy is dressed up with clothes a bit bigger than needed because he wants to grow up fast and become a cowboy. 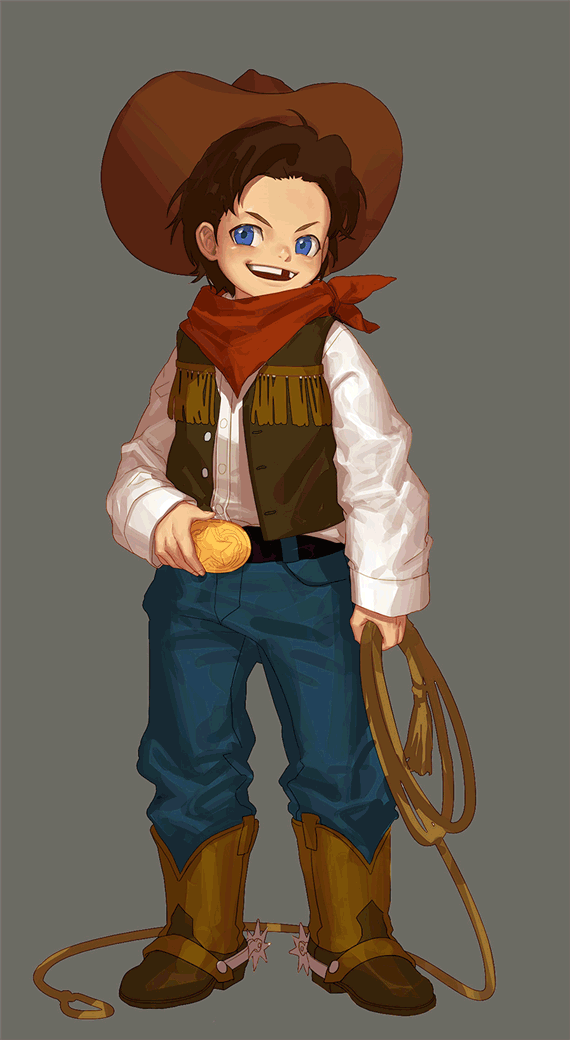 [The color of the scarf on his neck was a little dull, so I changed the color.] 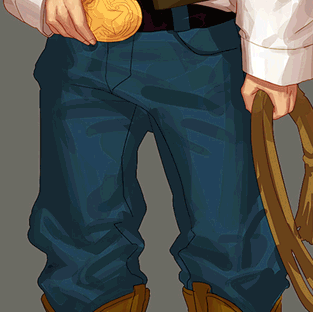 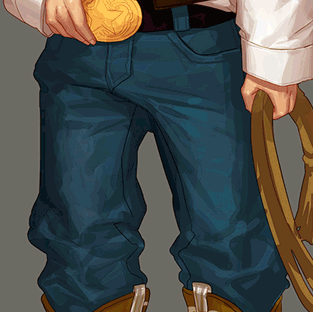 [I made the texture of jeans more outstanding.] 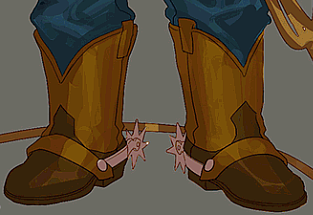 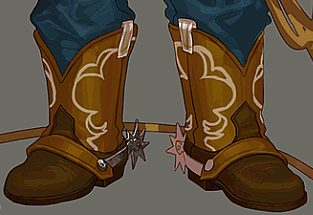 [I put a leather texture on the shoes, and also drew a pattern on them.] 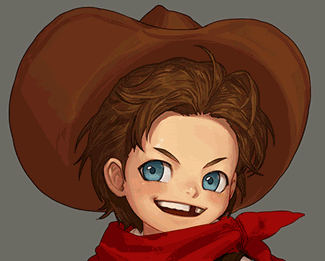 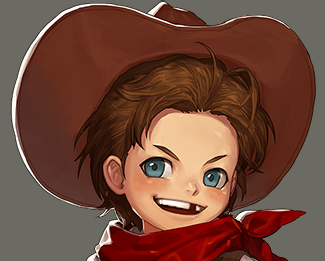 [When I was finishing the artwork, I reduced the size of his eyes and slightly changed the position of the hat.] 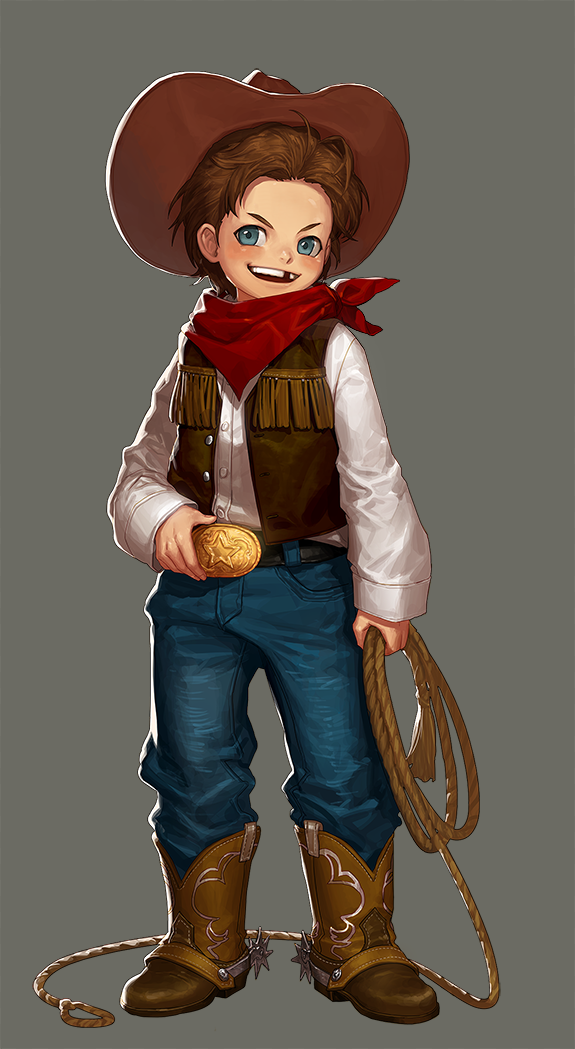 [I added more details and finished it by giving it a more natural touch.]
▶ See original illustration

[Let's compare the whole work process. Do you see the difference?]

When I painted the colors, I felt a lot of pleasure in depicting the leather, cloth, hat, and various other fabrics.
I will work hard to show you more wonderful works in the future.