Illustration Notes - Dungeon Loading Cutscene (Once Upon a Time in Arad) 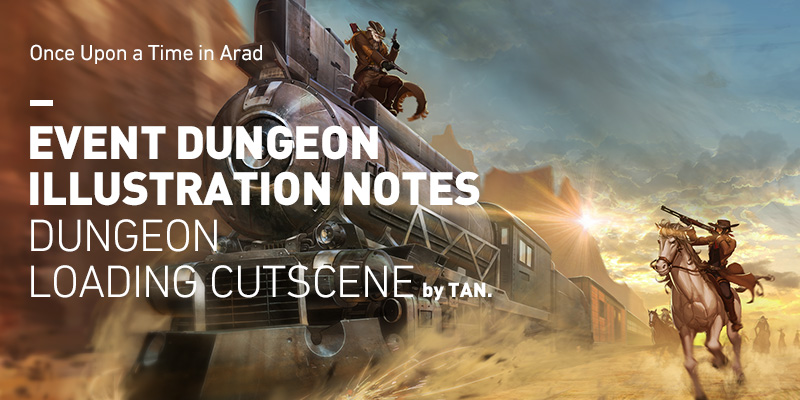 It's been almost a month since our very first exclusive DFO dungeon, 'Once Upon a Time in Arad' has ended.
Some of the most epic illustrations were showcased in this dungeon and we thought it would be nice to share with you the making process as well as comments of its creators!

Since there may be many adventurers who had been wondering about the story behind the development of 'Once Upon a Time in Arad,'
I hope to answer some of those questions by showing a little bit of content. Let's begin the series with notes from Tan from our graphics team!

Hello. This is 'TAN' who worked on the illustration of "Once Upon a Time in Arad"’s train loading cut in. 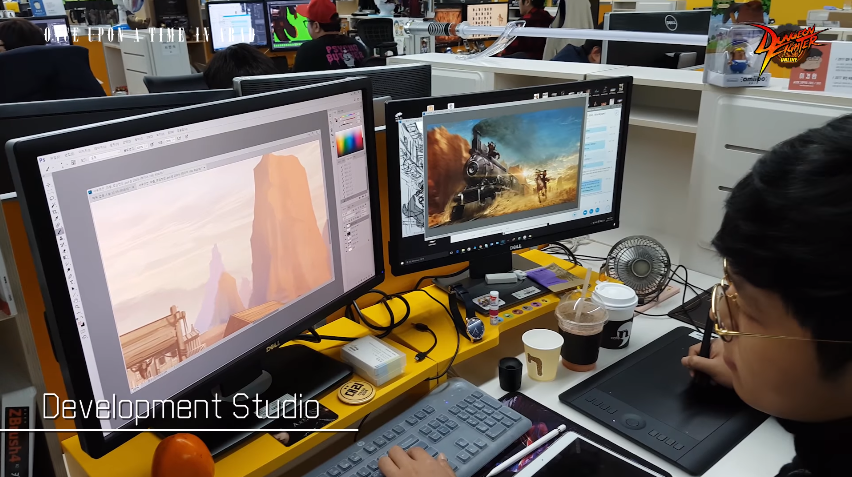 This loading cut started work on the subject of Arad warriors pursuing a convoy train taken by Wyatt.

At first, I wanted to assign a specific character to the warriors who chase trains, so I thought about which character to select. In order not to be attached to the recognition of the character and the package, I set it with a male and a female slayer and thought a composition. 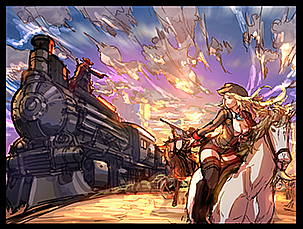 [In the beginning, I was thinking about this concept.]

I thought that it would be nice to have a scene where the pursuit situation is well expressed and the characters are pointing guns at each other. I thought of a scene in my head and I then drew several draft images that changed the camera position to the front, the back, and the side. 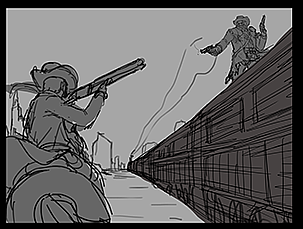 [As you can see, this is an example of what I had in mind for the characters pointing guns at each other.]

After the completion of the draft drawing, I chose the best one during a meeting with the graphic team.
This time, we selected the one with the best view of the train, which was the one with front perspective.
Personally, I wanted to draw the female slayer in a bigger scale, so that's a bummer, but instead I decided to draw a nicer looking train.

2. Drawing the Train & the Horse

I drew the picture using more defined lines.
In the early stages, the female slayer was in front of the male slayer, but was moved backward as it progressed. 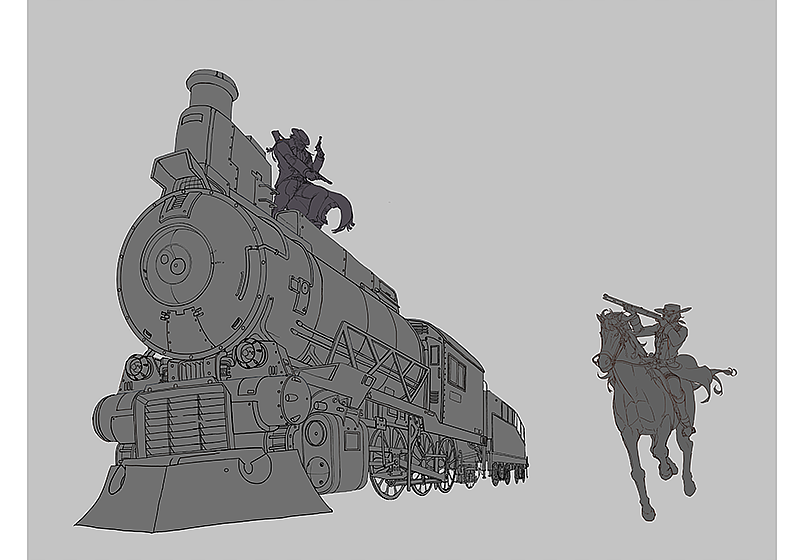 [I had to finish the line work carefully to make it easy to proceed later on.] 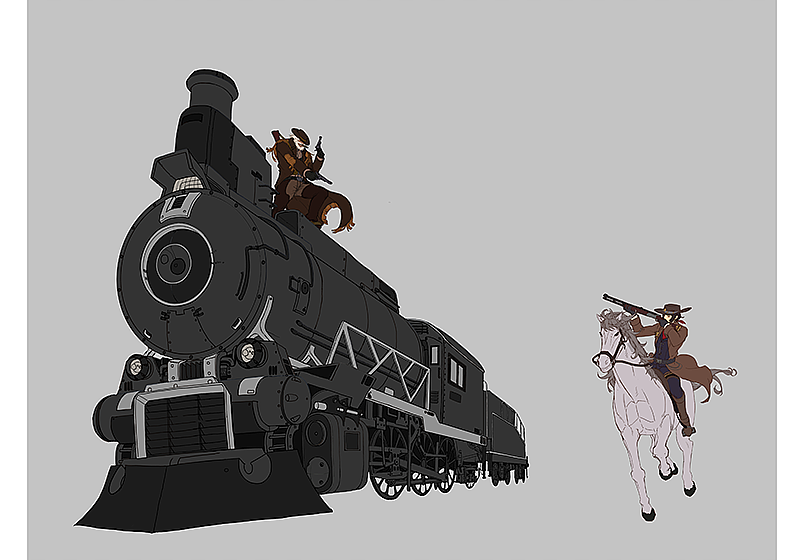 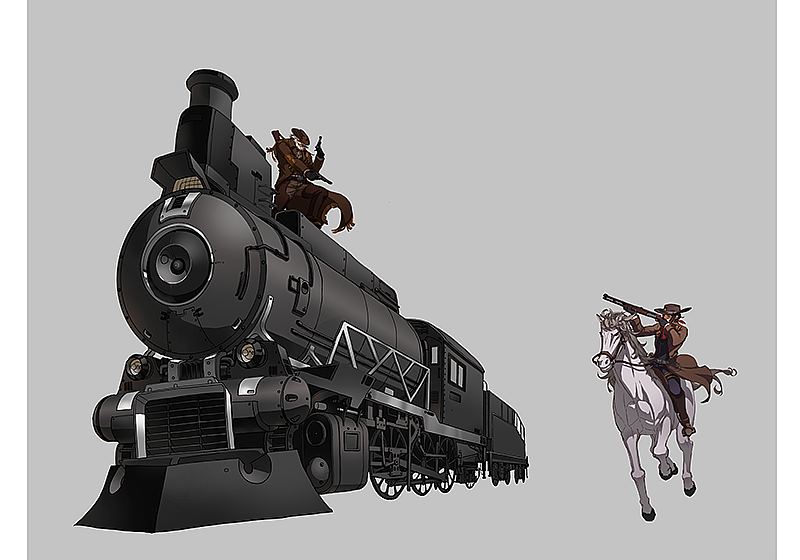 [I set the direction of the light, putting the contrast in two-tone and dividing the light and shadow parts.]

After that, I started to work on expressing the details. I split the surface to make it look more stereoscopic and express the light reflected by the texture of the object. 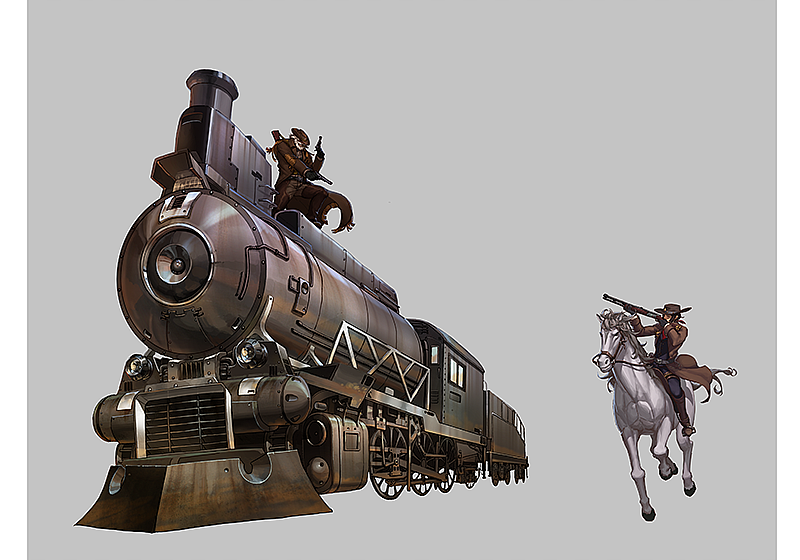 [Because the train is made of metal, I put a lot of effort into putting the metallic feeling with various reflections.]

The front part of the train felt small, so I increased the size and adjusted the perspective again. 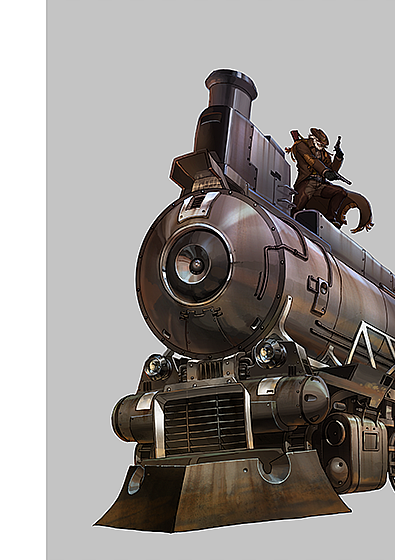 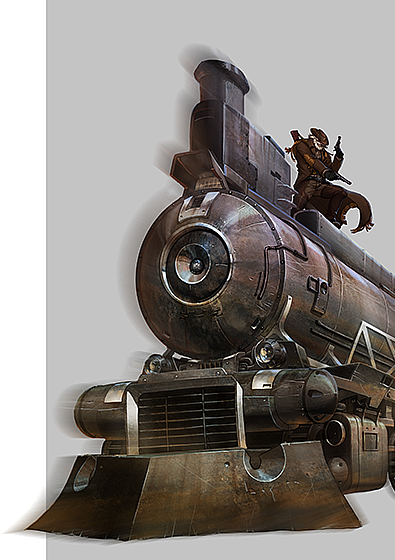 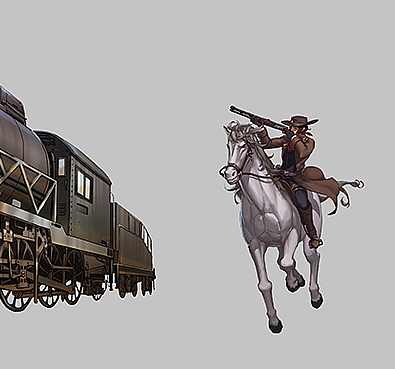 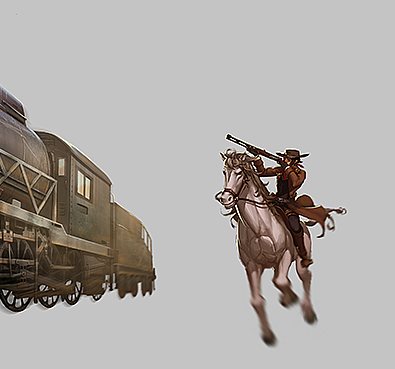 [I thought the male slayer was quite big compared to the size of the train, so I reduced his size.]

I wanted to deeply express the metal material of the train so that it became more lively. 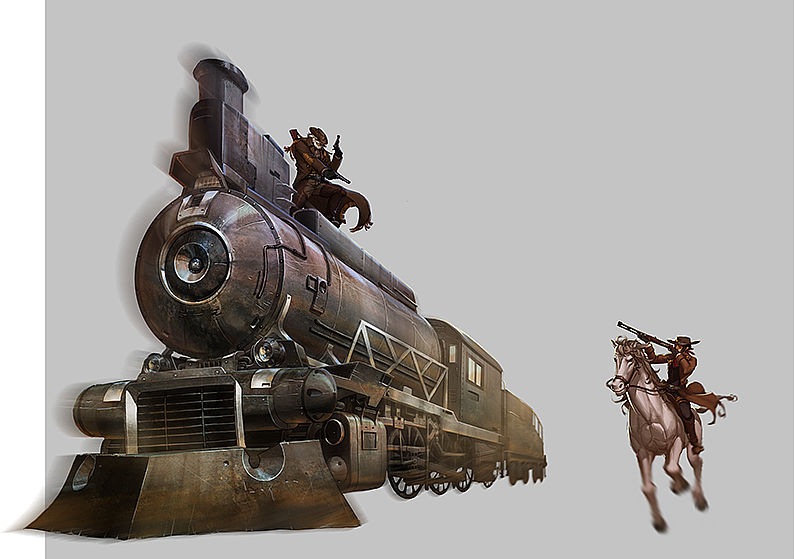 Then I painted the ground and background. As determined in the early stages, I painted rocky mountains and the wilderness. 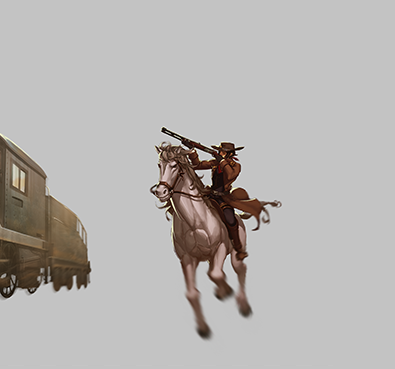 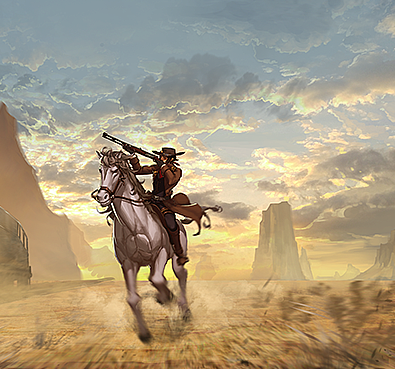 [I have painted the wastelands.] 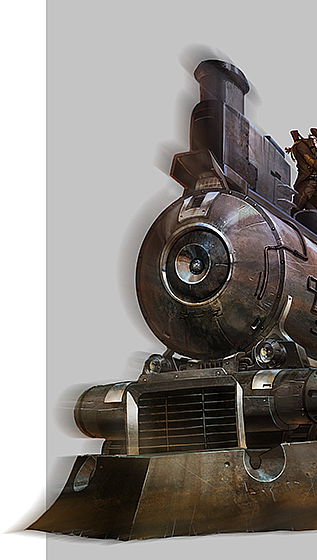 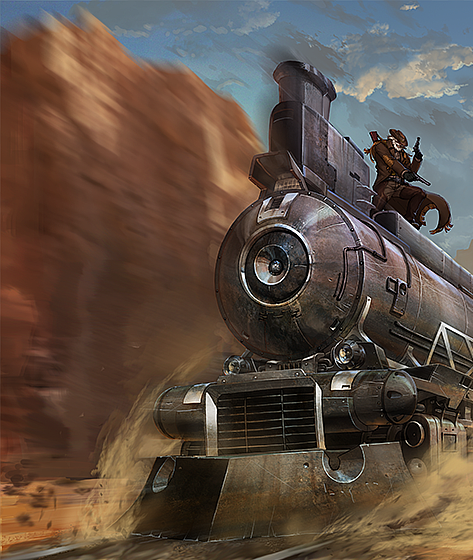 [And painted the rocky mountains.]

I liked to paint the sky with a lot of clouds, so I had drawn a lot of clouds.
However, due to the opinion that there were too many clouds, most of them were removed. T_T

This is the result after I drew the background. 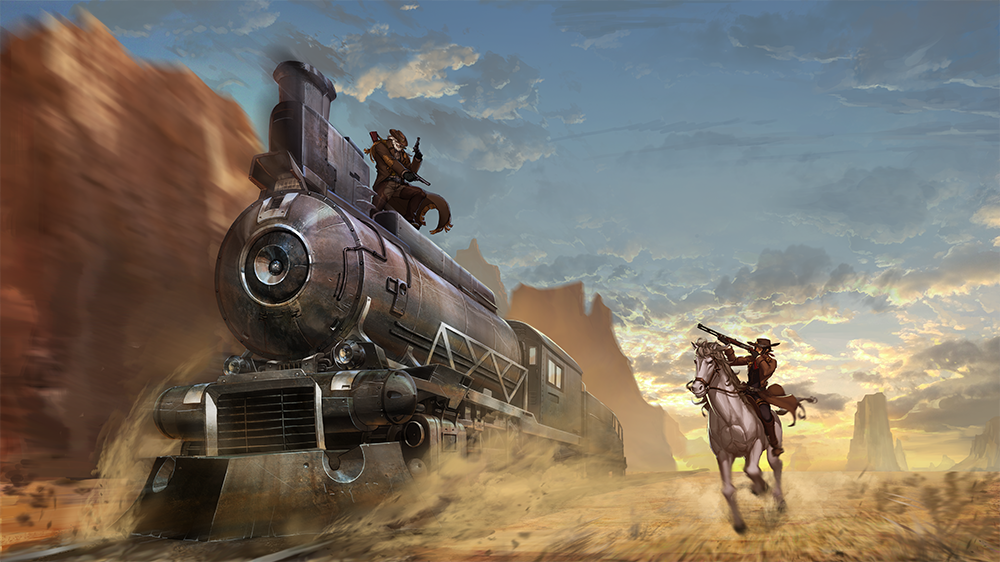 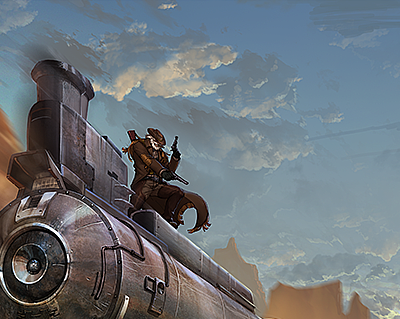 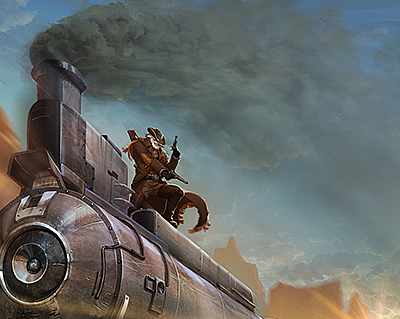 [I drew smoke coming out of the train's tailpipe as one of the last detail.] 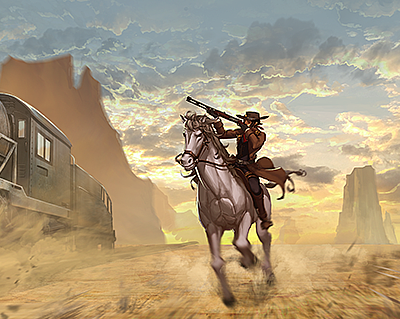 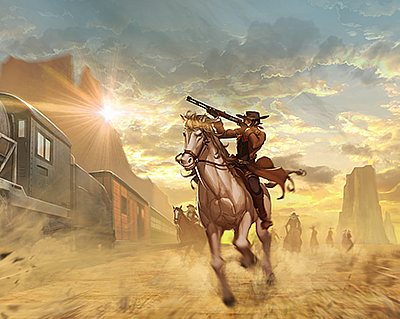 [I drew the whole group chasing the train, also adding a light effect for a sunset atmosphere.] 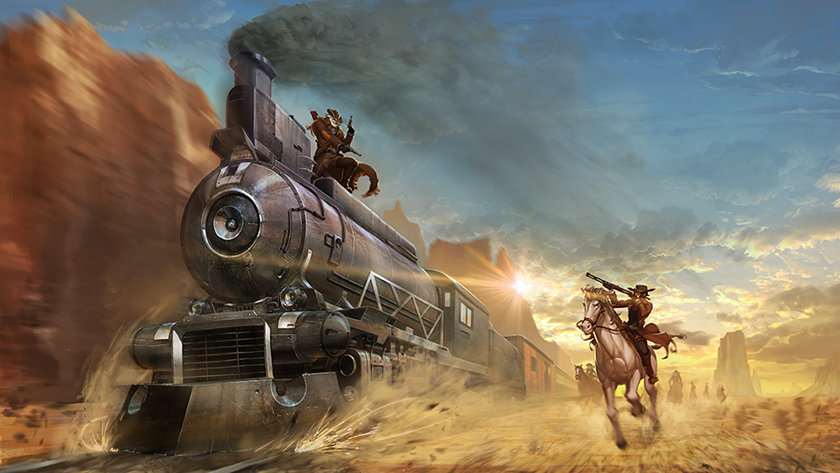 [And this is the final image. Clap, clap, clap! ]
▶ See original illustration

It was the first time for me drawing trains and horse riding people. The process was slow and difficult, but it was an opportunity for me to develop on my own ideas.
I will continue to make a lot of effort to paint even better artworks.

Did you enjoy the production notes of our graphics team members?
TAN's illustrations were created as a wallpaper too! You can download them below!

Please send your appreciation to the graphic designers who put their heart and soul into bringing out the best illustrations!
We will be back with another production notes next time. :)