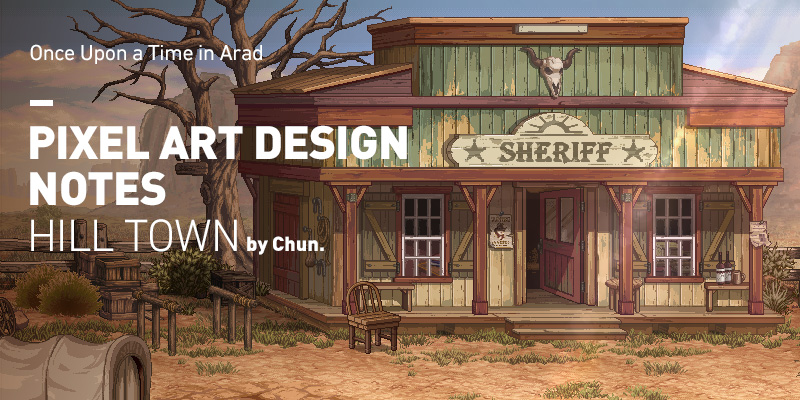 Greetings, adventurers!
This time, I would like to introduce you to the process of pixel art production in "Once Upon a Time in Arad", following the introduction of illustration notes from the last time.
I think there are lot of adventurers who are probably curious about the process of making pixel art designs.

I will introduce the pixel art craftsman who works pixel by pixel from now on. :)

Hello everyone! I am Chun, the background pixel art designer of the 'Once Upon a Time in Arad' dungeon.
I am glad to introduce my work to DFO players!
I have made many dungeons in the past, but for the first time I have made a dungeon that feels like the Old West. I hope you enjoy it. ^^
Among the things I have worked on, I would like to introduce you to the "Sheriff's Office" and the "Saloon" that you have seen the most.

First, I planned the whole feeling of the background from the original paintings to the background concept illustrations, then worked on the details with pixel art.
I started to do the actual work after a lot of photographs and
images that could be the basis of the background, and the detailed representation of the various objects were clearly visible.

The image of what I thought the Western era was, 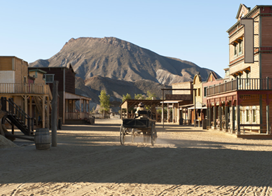 Buildings made of wood, 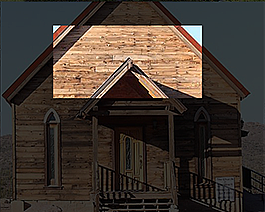 And it occasionally came up with a form of reinforced structure mixed with buildings. 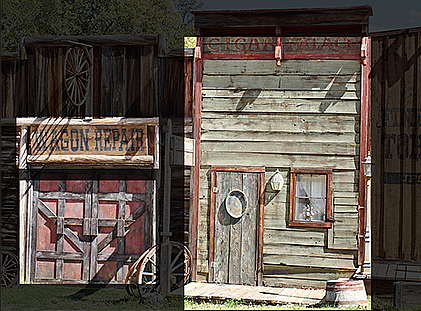 I think it would be better to put a font that fits the atmosphere of the times in the building signs, and I looked for an image related to it. 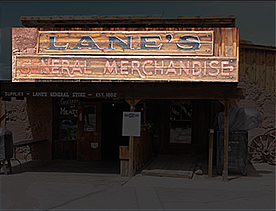 2. Making the Frame of the Building

I made the overall shape of the building so that the buildings did not escape the composition.
I made a frame of wood-based buildings and a whole frame, and created a basic framework by expressing the features of each tree roughly and simply. 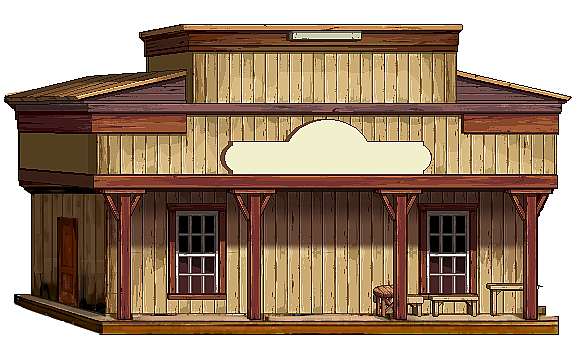 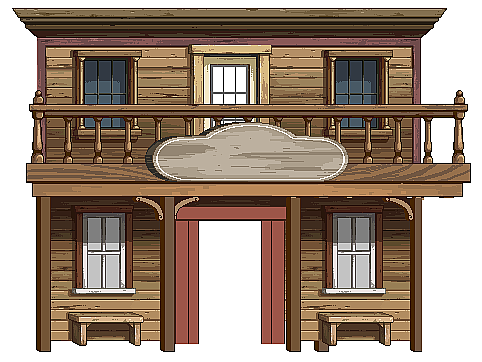 I set the positions of the windows and doors for the correct size and detail, Select the appropriate fonts and texts to represent the Western-era feel to the signboard and capture the characteristics of the building. 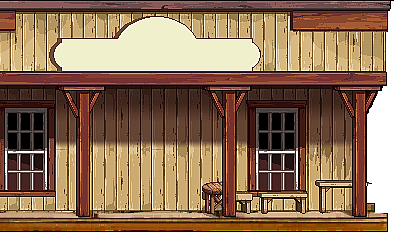 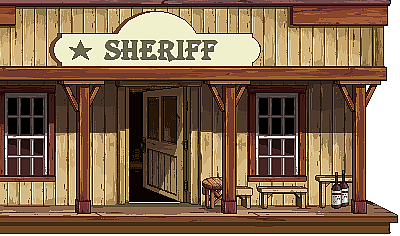 I added objects that could otherwise feel the West age. In the case of the sheriff's office, I added a color strip on the top to eliminate the flat feeling. 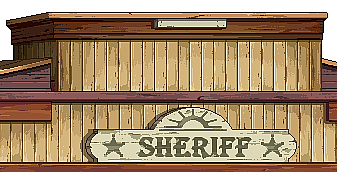 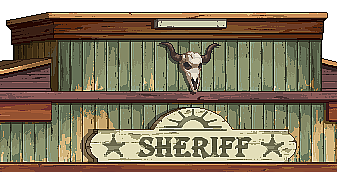 [Added an animal skull on the top of the sheriff's office signboard.] 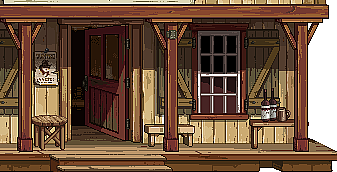 [Changed the object location near the entrance and added a sheet of paper.] 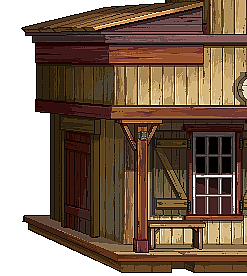 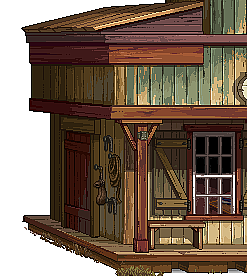 [Also added a rope to the left side of the building..]

Finally, the following building was completed. At this time, I adjusted the overall color so that each created object would match the background and floor tiles. 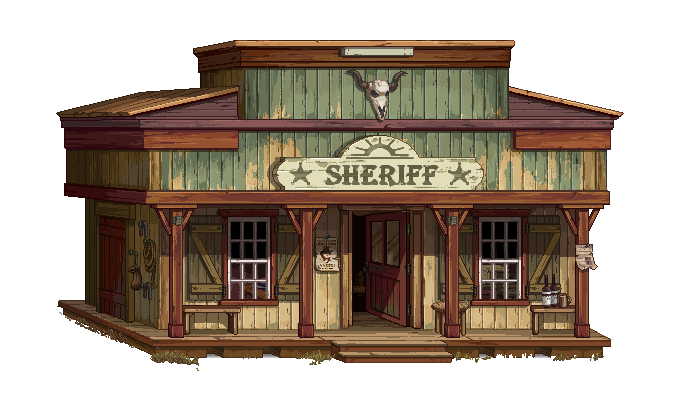 I made the GIF image easy to understand the process of change.

The next building is the Saloon. At first, I made a sign by selecting an appropriate font, I make the door by referring to the form of the door that I saw in the researching stage. 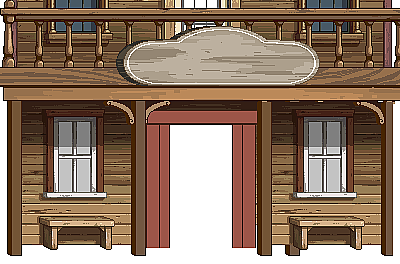 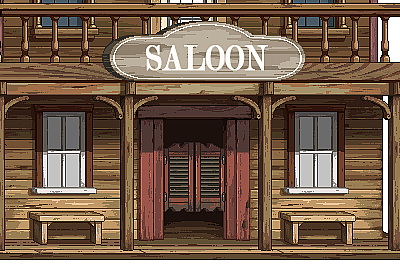 I paid more attention to the signboard details and expressed the old feeling of the wood. I added realism to the Saloon building by adding curtains, kegs, etc. to suit the characteristics of the building.
I also put some objects such as lamps and glasses to further enhance the feel of the Saloon. 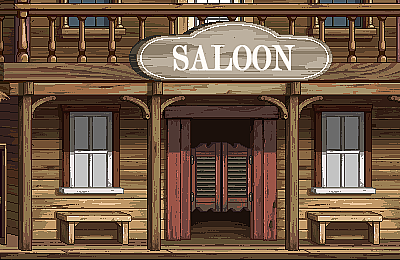 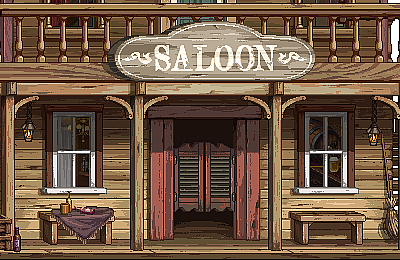 [When I added a light, a deeper atmosphere started to appear.]

[I also expressed the inside of the room of the second floor for the guests.] 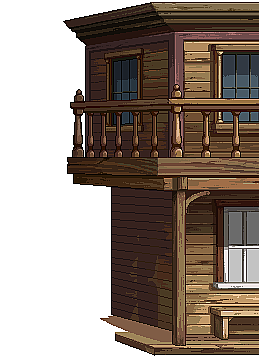 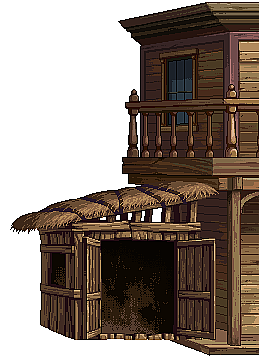 [I added a resting place for the travelers' horses. There was a perfect space on the left to make the stable.]

After finishing the work, the following atmosphere of the Saloon was born. Like the sheriff's office, I adjusted the overall color so that the building could match the background and objects. 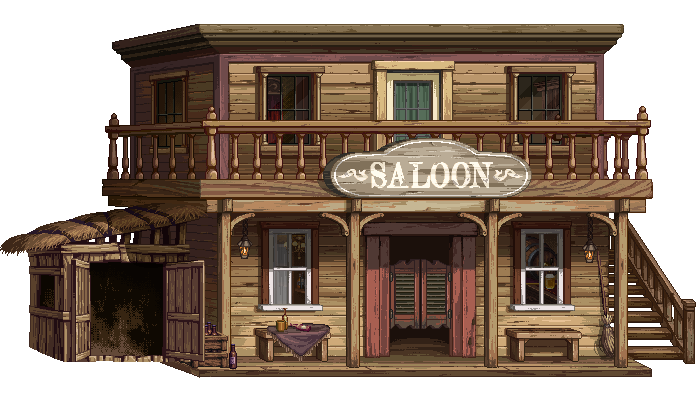 GIF images to compare the process of change.

I added an effect for a stronger sunshine and completed the hill town in the western village by adding dust and dry grass to express the barren feel of the village. ^^

When I was working on the hill town background, I referred to movies and images that portrayed the Western era. I drew images with various expressions of wood that could be on a wooden building, (Sometimes the expression of detail in the wood was a bit difficult because it made the building look dirty. T_T)
Finally, I was able to adjust the depth of the details to match the overall quality, and it was very interesting. Thank you ^^