Voice-over Recording Session Notes (Once Upon a Time in Arad) 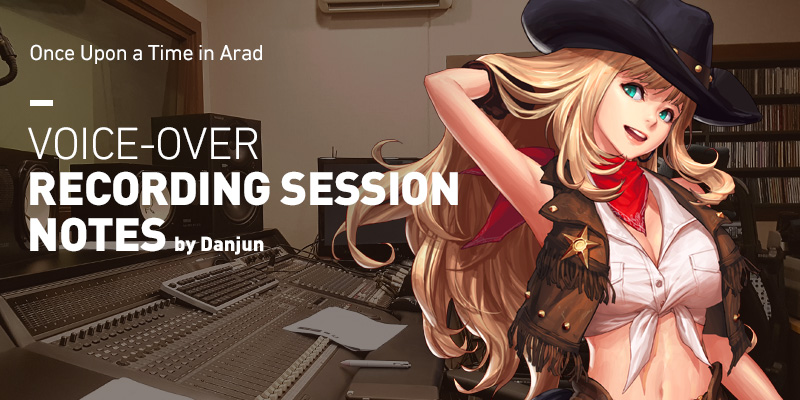 This is the one and only Danjun! It has already been a month and half since our very first exclusive DFO dungeon, 'Once upon a Time in Arad', was introduced. Along with the graphic production, this time, Danjun wants to show you how we produced the voice-over for the characters. Since all of the voices from Dungeon Fighter Online are in Korean, we decided to insert voices in English to provide a more genuine experience to the adventurers.

Please allow him to explain what actually happened at the recording studio!

■ How we recruited the voice actors

At the beginning, Danjun, who is in charge of the recording production, contacted many voice actor agencies and obtained various recording samples. Then, Danjun and BTS, the dungeon creator, started to analyze them thoroughly. Most of them were prominent voice actors active in the field of animations, movies, education materials, commercials and games.

However, we wanted actors who were able to naturally express the personality of charismatic and stately Varaccht, evil and greedy Wyatt, lunatic Crazy Dynamite, sensual Bell the Madam and even innocent Kid.

There were so many capable candidates during the recruitment phase, truth be told that it was hard to pick only four. The finalists satisfied all our criteria. Now, the only thing left is the session, embodying the characters lives'.

■ The experience with the voice actors

When we started to think of voice-over, the main concern was who could most effectively depict Varaccht and Wyatt, the core characters of the scenario. Both of them are aged men but there are big differences like being good and evil, muscular and chubby, solemn and vulgar. Then, as soon as we heard Andrew's voice, we could let him do both characters alone. He was the right person who not only had deep and low tone but also was able to do the Western dialect, frivolous and serious characters without a flaw. Moreover, Danjun planned to create an old-fashioned Hollywood type trailer that includes the famous "In a world..." phrase. We trembled when we heard Andrew’s lines. It was one of a kind experience to see the Hollywood trailer right in front of us. We requested for many different kinds of tones and he was a real veteran at this kind of job.

["In a world" phrase recording sample]

For games or movies, we often see young men as main characters, and Mike's voice sounded fit for them. He could express vigorous and optimistic young men as standard, and then with pitch and tone changes, even with diverse age and personality. Speaking of energy and youth, 'Crazy Dynamite' was the character he could perfectly depict. 'Crazy Dynamite' is a young man full of lunacy and violence. He successfully finished the difficult job, which had to balance energy and madness. Also, he delivered the dynamics of the dungeon through various monster sounds.

[Bentink, the model of Crazy Dynamite]

This charming lady of calm attitude is Jenifer(with a single n) and she gave us a shock with contrasting performances. She looked so placid in person but when she got into the recording booth, she became a different person. A sly and arrogant woman 'Abernathy' was Jenifer herself now. A spy character must have multiple personalities to express many faces and Jenifer did it just as we wanted. Furthermore, she nicely did a completely opposite character, the 'Innocent Girl' from gunfight sequence. While a fierce gunfight is going on, the Innocent Girl gives us a breathing space.

Unlike Jenifer, Kelly is an outgoing and lively person, you could feel her enthusiasm as soon as she came to the studio. That personality reflected in the character of the Kid. She portrayed the Kid really well. This character despite having a painful past at the hands of Wyatt still had strong hope for the future. We couldn't think of any other person suited for the role of this elusive character. What's more she was not only good with vibrant characters but also with the sensual and mature female characters like "Bell the Madam", based on Kiri a beautiful and elegant lady. If one does not interpret the character well, the performance could be quite awkward but Kelly showed an excellent performance, one of the most memorable voices from the contents.

The session was done with the professional voice actors but the creator knew all about the concept and setting of the dungeon. BTS, the dungeon creator, tried to express all the characters carefully with much consideration. Moreover, Danjun who had recording experiences in many projects before played a role as a translator and co-producer. As the setting was in the old west, we recorded again and again to derive all the small troubles including the Southwest dialect and everyone at the studio tried their best.