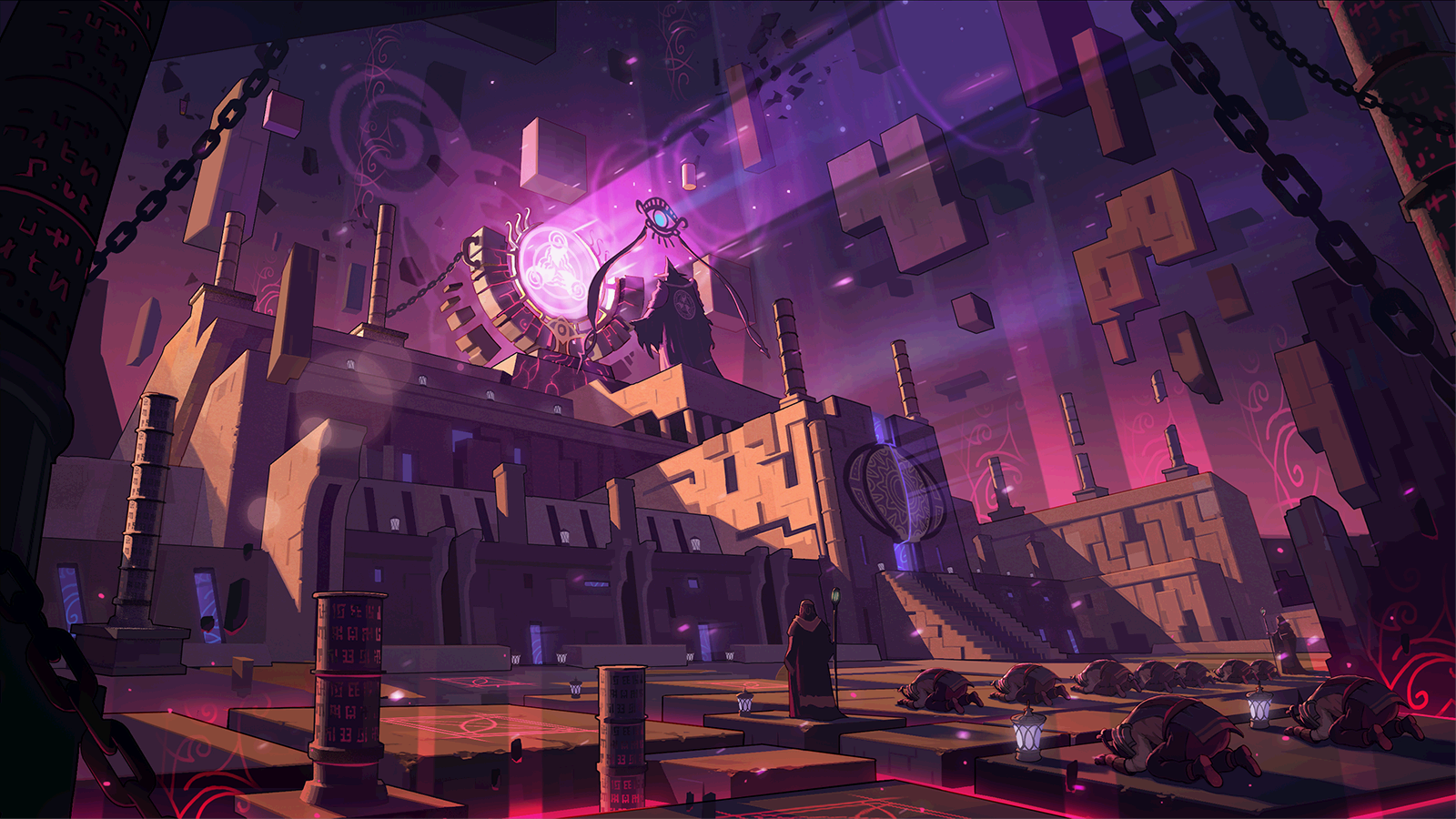 The Oculus: the Sanctum of Resurrection

The Oculus, meaning the eye that reflects the world, is a place featured in a legend of the dark elves
that tells of a being who was higher than the sky and its clone who was confined in this place.
The Grim Seekers have occupied and declared The Oculus their sanctum, calling it the place of resurrection of a great being, and are now performing a secret ritual in there. 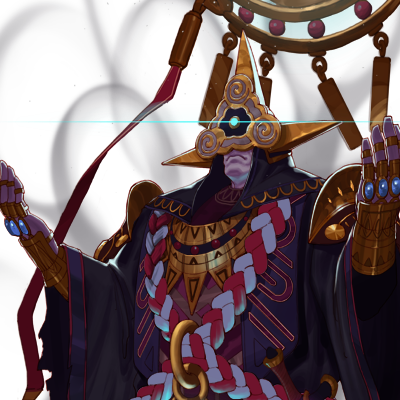 The man was deeply troubled.
His face, hidden behind his dark, solemn mask, was twisted into a subtle grimace.
Two of his good friends had left for the Empire's mining village to die as martyrs.
They didn't hesitate. Rather, they were smiling when they left him.

It had been a long time.
When the seven of them first gathered and learned about the Prophesy of the Apocalypse, they felt drawn to their destiny.
He decided to lead the others, for he had received greater power than them, and established the Grim Seekers.
There were many hardships and obstacles, but his group continued to grow.
Its influence reached the Principality of Bel Myre, the De Los Empire, and Suju, and even crossed the borders of the Fennes Kingdom.
But they had their limits. Slowly, its members grew more radicalized, which was a problem.
Then, came the woman named Azalea Lott.

Not only did she know the Prophesy of the Apocalypse, but she also had a solution for it.
She'd even prepared a warrior named Soldoros and a treasure called the Genesis.
Ezra stepped down from his position as leader and decided to follow her.
He had no reason to hesitate. But then...
Azalea was killed by Soryun.

The tragic news came as a shock. The woman who came out into the world to protect the Apostles was murdered by another Grim Seeker.
All their plans to stop the Prophecy of the Apocalypse was reduced to nothing, and years of effort were in vain.
Ezra's very soul screamed. Myriad thoughts raced through his mind.
He wandered in darkness, looking for answers. After a long time, he finally found one.
This is the only way to resist her, the one who rises higher than the sky itself.
"Gather all the Grim Seekers."

Back to the present.
Ezra pulled himself out of his thoughts.
Where his two friends would be, he instead saw all the remaining Grim Seekers gathered before him.
They were all looking to him. They must have heard the news of Azalea's death,
but their eyes were filled with passion, instead of grief, to accomplish their mission.
Ezra shook off his hesitation and spoke to them in a gentle baritone voice.
"Your sacrifice will not be in vain."

Everyone left with a determined look in their eyes. Soon, he would have to leave, too.
But for the moment, he stood alone in the vast sanctum, falling back into the abyss of his thoughts. 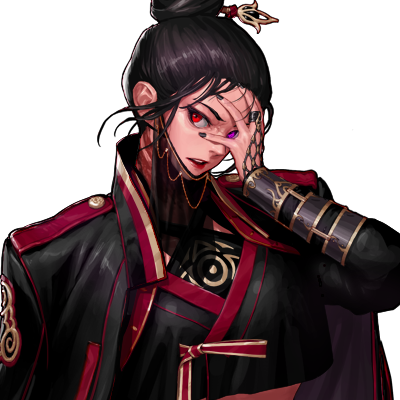 Soryun flopped to the ground, biting into her lower lip as an unpleasant memory flashed through her mind.
The smell of blood from her torn lip stung her nose.

She thought enough time had passed for her to be okay to be back in here. She couldn't have been more wrong.
The Screaming Cavern was where the hateful power that had killed her parents entered her body.
The cavern looked different with the passage of time, but the nightmare still plagued her mind.
The deeper she went, the vivider and fresher the traumatic memories in her mind became.

These horrible memories wouldn't leave her alone, even for a moment. Her scar stilled looked fresh after so many years.
Soryun's hand wiped her bloody lip and trailed down to her chin, where her touch had left a vivid hand print like a stigma.
Snap out of it! Remember your hate—you're here for revenge!
She silently screamed and screamed. Slowly, her body stopped trembling.
Her sword had already been drawn and swung. Now, it was dripping with blood.
There was no turning back now.
I'll devour everything to achieve my goal.

A gentle feminine voice broke her concentration.
Soryun lifted her head and looked at the woman standing before her.
She'd been with her since the day she lost her parents.
She took care of her as if she was her own.
She was one of the seven branch managers protecting the Grim Seeker Sanctum.
Dusky Mirage. The blacksmith in Elvenguard gave me the right directions. Finally... Finally...!
"You've done things that can't be reversed. Stop now, and the Prophet will..."
Soryun staggered forward. Her face was an angry, distorted mask, her breathing quick and shallow.
She was a jumbled mass of tension, madness, desires, and... hunger.
"Shut up. You don't know what you're talking about."
"Soryun..."
Mirage instinctively knew what Soryun wanted, why she came for her.
"Poor child..."
The sad smile on Mirage's face was hidden behind her mask as Soryun lurched toward her. 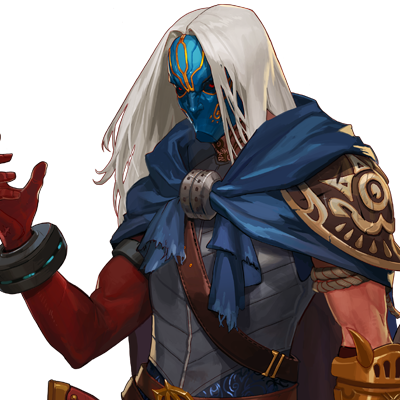 He wasn't a famous adventurer, but he did well enough to put food on the table for his family.
But then, he was cursed with the Ghost Arm later in his life and lost everything he had,
including his wife and daughter.
He'd been hiding his face behind that blue mask since then.
He'd traveled for a long time, looking for ways to subjugate his Ghost Arm.
Every night, he dreamed about losing his wife and daughter. Every day, he was sinking more deeply into the swamp of death and despair.
Then, one day, he was involved in some incident in the Screaming Cavern.
There, he met the first people that he came to trust since he wore the blue mask.
Because of them, he laughed for the first time since he lost his family.
His happiness didn't last long.
A swordsman of the Mist, whom they came across in the depths of the Screaming Cavern, obliterated them,
leaving him as the only survivor.
This swordsman of the Mist killed his comrades one by one, while he desperately tried to stop him,
and left him alive with numerous injuries.
This swordsman toyed with him, and then left him to live through a reality worse than hell.
Again, Lone Roseberry lost his purpose of life.
Then,
a mysterious energy suddenly entered his body as his mind was flooded with memories that weren't his own.
He grabbed a sword that was thrown onto the ground and started walking as if possessed.
When he stopped, he met six people who were different from him, but somehow the same.
Among them was a girl who reminded him of his late daughter.

"Lone Roseberry."
A deep, rumbling voice brought him out of his thoughts.
He looked up at the man, who once was a humble man, but now the leader of his group.
"Everyone knows your contributions. They know what happened in North Myre,
how you sacrificed yourself in there, and why you had to travel numerous dimensions before you returned."
His voice was deep, rich, and solemn.
"They also know that you're responsible for what she did."
Lone knew what his leader would say the next.
"Take care of her, and..."
The image of his daughter smiling brightly at him came to his mind.
Years of his deep, sad longing suddenly weighed down on him.
"...yourself. For everyone."
His leader's gentle baritone voice struck him to the core, adding to the weight that was already crushing him.
Maybe he was finally being punished for the sins for which he should have atoned a long time ago.
A momentary silence fell between them.
Lone, who hadn't said a word, finally opened his mouth.
"... As you command."
The image of the girl when she was younger overlapped with the image of his daughter.
She was smiling brightly at him. 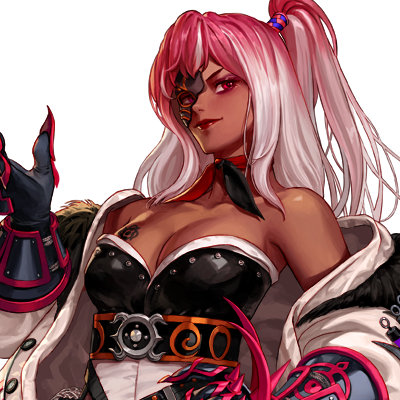 Since when?
You know, ever since the Screaming Cavern Incident.
Yes, that.
I didn't want this, but it happened.
Ho ho.
How can I laugh? Does it even make sense?
My life was a mess the moment I was born.
I gave up on having even the tinniest bit of happiness.
Now, at least, I can contribute to something greater than myself.
Living was torture, but I was lucky to meet you guys.

And Farris...
Never mind. I've got nothing to say to her.
Oh, where did the time go?
I'd better go now. It's time I did what I came to do.
Oh, right—please don't tell Farris this.
What if she finds out?
Ho ho. Well, you'll know what to do.
This won't be your first time getting yelled at, right? You'll be fine.
Goodbye, then.
I'm glad I got to talk to you one last time, Gale.

A place on the way to the Altar of Truth, filled with the long-cherished wishes and sadness of the Grim Seeker followers.
They came to The Oculus on pilgrimage and are now resting here for eternity.
Prophet Ezra has named it the Pilgrim Shelter in memory of everyone who bravely carried out the mission to stop the end of the world.

The place where the Grim Seekers' last ritual is taking place.
According to Prophet Ezra, it's the place of sacrifice for the success of their mission to stop the end of the world.
All the Grim Seeker followers in this place are soft-liners in their group. They came to stop the Alliance Army from interfering with their work and to sacrifice themselves for the ritual.

"All truths will finally be revealed in this place."
- Prophet Ezra, upon reaching the Altar of Truth