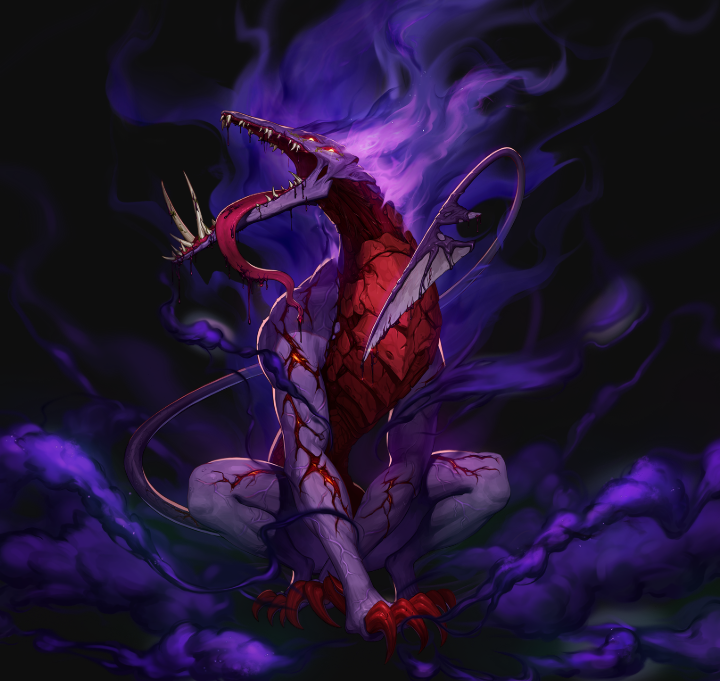 It'd been thinking all along.
Its body was shredded beyond recognition.
The remaining nerves in its maimed body squirmed terribly, forcing it to experience pain worse than death.
Its immortal body was like a curse, keeping it from finding peace in the bliss that was death.

It thought,
I wish Death would take me. Just let me rest.
But its body made sure it would never happen.

After a while, its torn body started piecing itself back together.
It thought,
I wish my body would return to normal.
But the dimension already had planted terrible pain in its body.

It thought,
When this terrible pain finally goes away and I recover all my strength,
I'll return this anguish tenfold
to the world that drove me into this dimension that's more terrible than Hell.

Slowly, but surely,
the thing opened its eyes in the dimensional storm.

The fragment was neither solid nor liquid. It was something in between.
It became what it was now when it fell off the Miscreation.
It developed a mind of its own while wandering about the dimension, swallowing other things.
There were not many things to swallow, so it drifted as an incomplete being.

Gradually, it adapted to its surroundings and continued to swallow what was in its path, trying to complete itself somehow.
It never became complete.
Its hazy brain questioned why and agonized over possible reasons.

Then, one day it heard a voice.
This voice was unmistakably calling for it from beyond the dimensional storm in the distance.
It called Jagos to come over.
Jagos couldn't refuse. Or it had no reason to refuse it.

Jagos shifted its lumpy body and headed to where the voice could be heard.
Perhaps this voice can make me become whole.
Thinking that, Jagos moved forward, swallowing everything as usual.

"Come, my most powerful fragment. I wish to become whole with you here."
- Dark Miscreation

When the swirling energy that drifted inside the dimension wrapped around the Miscreation's body and brought sharp, tearing pain, its body burst, splattering red liquid everywhere across the dimension.

The Red Beast was born from this liquid.
Its body was as red as the liquid that dripped across the dimension, like rain down a window, and it had some of myriad energies that the Miscreation had.

The Red Beast instinctively moved and wandered across the dimension.
It endlessly traveled through time and space, as if to find its origin.

It caused disasters everywhere it went.
Every step it took caused red liquid to erupt and the sky to redden.
It harvested numerous lives under the red sky.

Then, it just stopped.
It was about to harvest more lives when suddenly it wailed at the sky and disappeared into another dimension.
It was as if something called the Beast. Or maybe the Beast had found what it'd been looking for.

His memory was hazy, but he remembered coming across something somewhere and trying to nibble at it.
He was soundly dominated by his prey. Its energy encroached upon his body, melting it slowly.
He remembered how he closed his eyes slowly and quietly.

In his faint memory, he was called by some name.
When he woke up again, he was called by it again.
He felt angry and resentful toward this name. He was also obsessed with it.
He instinctively knew that it was the purpose of his life and the reason he was brought back to life.

He tried tracing back through his vague memory.
He looked for possible sources of his anger, resentment, and obsession.
He followed the smell of his memory for a long time, and finally remembered.

The word that he once was referred to a long time ago, when he was still alive.

That was the name others called him.

Duke of the Dirty Star

Fated or not, he wasn't going to die easily.
For millennia, he'd been waiting for a day like this.
He once thought he'd be remembered by history.

His dirty body perished easily.
The long time he'd lived had no meaning whatsoever.
The moment his body fell and crumbled, his history died with it and destiny stopped.

He is not going to let that happen this time.

His new body has grown out of the dirty land, carrying a soul born out of the meaning that He gave him.
He was going to burn the debris of the dead history and use it as fuel to restart his destiny.
In a new name, on this dirty land.

Traces of the Dark Miscreation 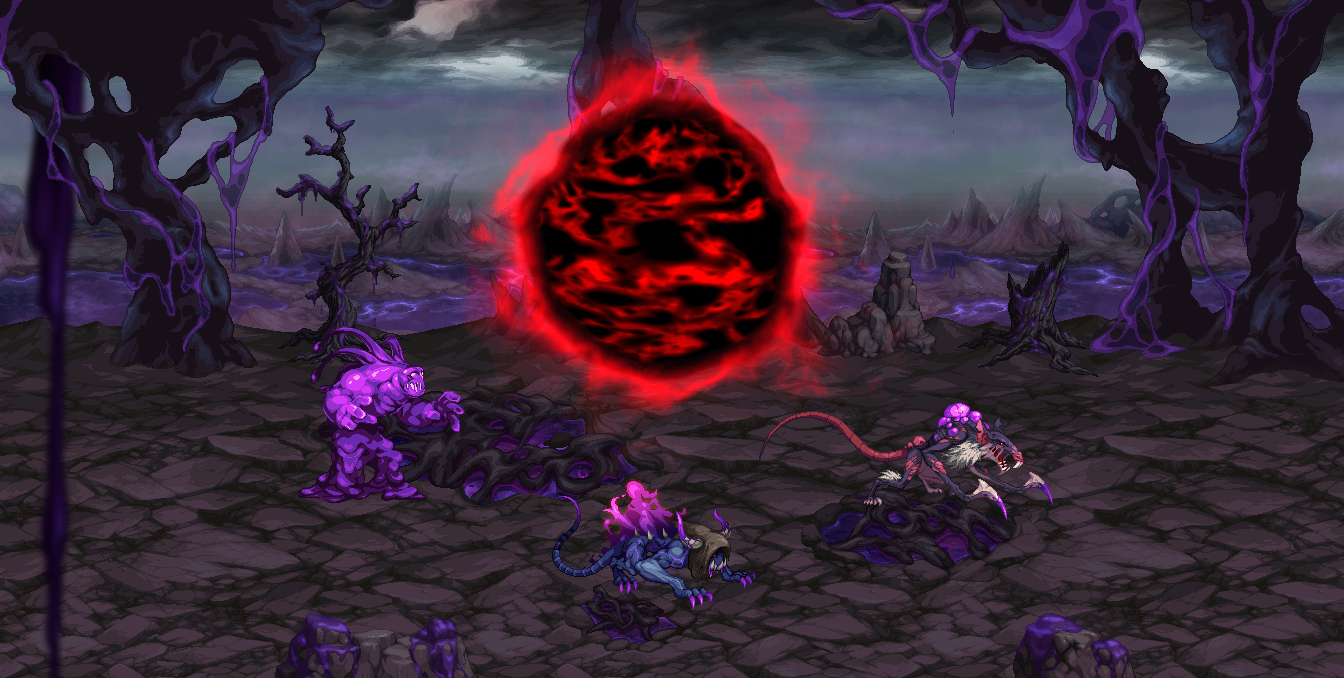 The Adventurer enters the Dark Dimension following the dimensional energy that they've felt within the storm,
and arrives in a place that looks completely different from the world outside.
There, they discover traces of the Dark Miscreation
and encounter strange-looking creatures that look as if they were spawned from this monster.
As they defeat more of these creatures, the energy that they've sensed in the Dimension grows even more ominous. 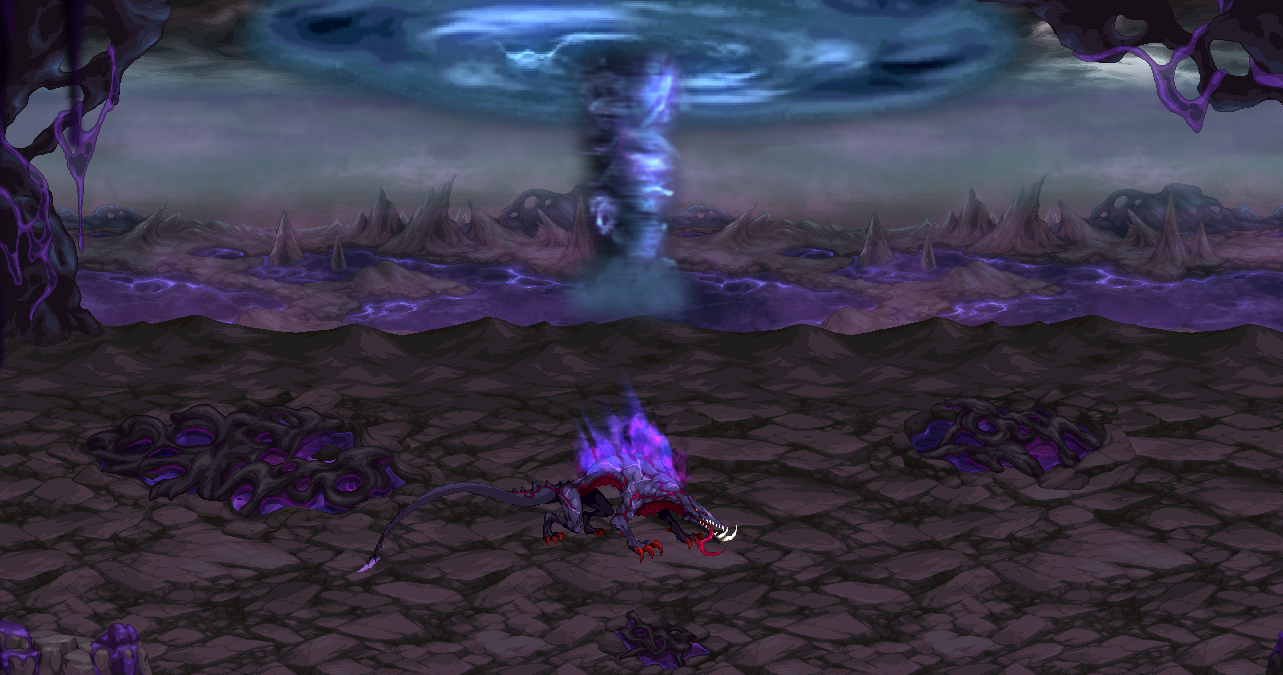 The closer the Adventurer gets to the source of the ominous energy, the stronger the power of the storm becomes, shaking their surroundings.
The Adventurer and their party follow the traces of the Dark Miscreation and encounter a torn piece of it in the Dimension where it's been biding its time to get revenge.
Now, they must stop the Dark Miscreation from coming across dimensions and tainting their world with its cruelty.