The Land of Chaos 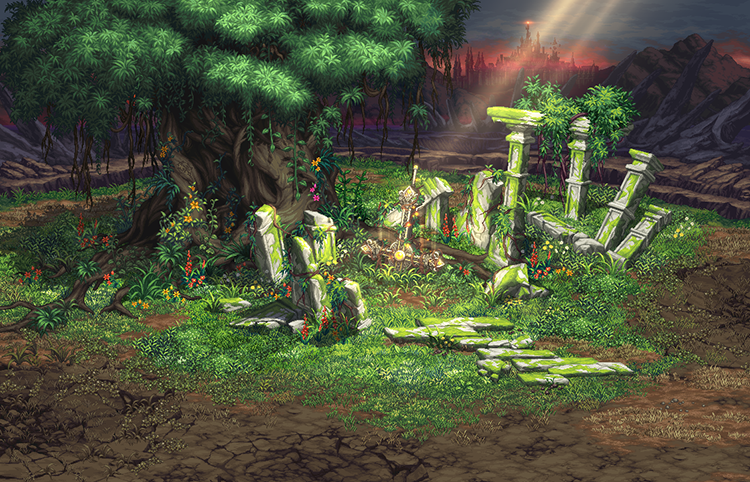 For a long time, Michael battled Ozma, over and over again.
He then suddenly disappeared, leaving only his cross behind. 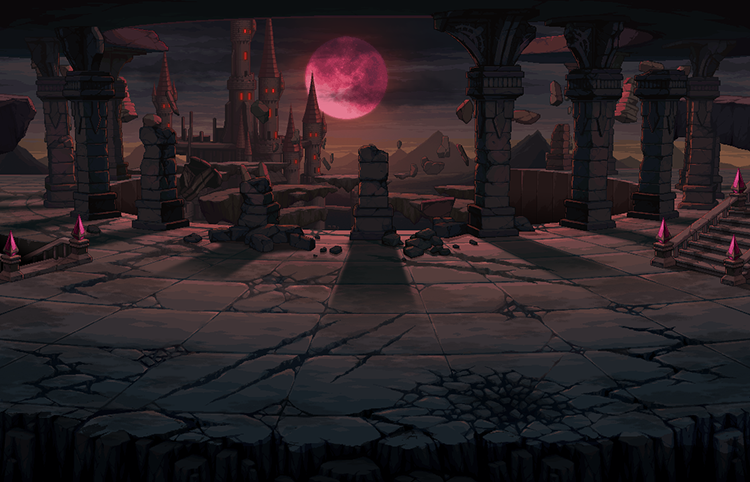 Elerinon was called the City of Glory during the age of Pelos.
Back then, this tower symbolized the city's prosperity and knowledge. Now, it's occupied by Ozma's lieutenant and the very first Imposter, Empernoir.
The old Tower of Glory now serves as a relay station for Ozma's oracles.

Grauben the Sanctum of Terror

A satellite of the once-bustling city, Elerinon, mainly resided by posh merchants and noblemen.
When the Black Crusade broke out, the city fought back, but then Astaros sneaked in and spread Imposters from within.
This is also where one of the Holy Five, Shapiro Gracia, defeated Horrendous Astaros. 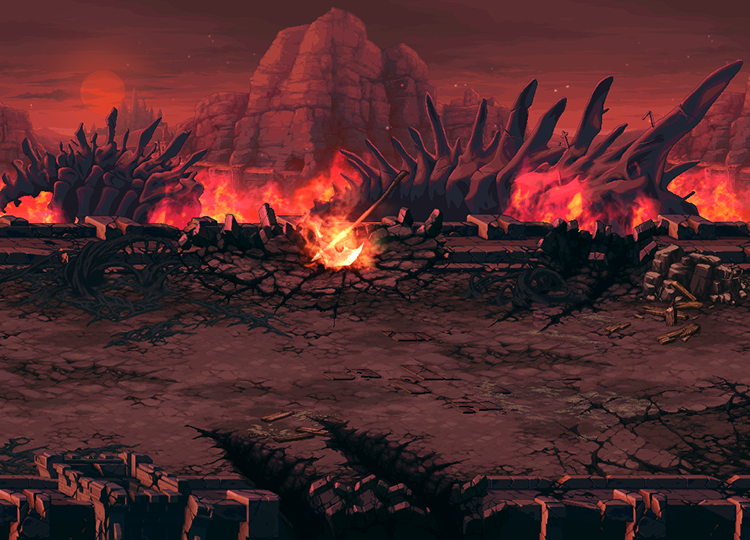 A beautiful valley on the Minas Plains where Pelos's prosperous city, Elerinon, stood.
It was devastated during the Black Crusade by an intense battle that turned the river red from all the bloodshed.
Here, Lamier Redmayne, the very first wielder of the Holy Fire, seized the topographical advantage and singlehandedly burned hundreds of Imposters before she died.

It used to be a small, nameless chapel outside Elerinon.
During the Black Crusade, countless Priests were killed here by the Three Dark Knights and Imposters. 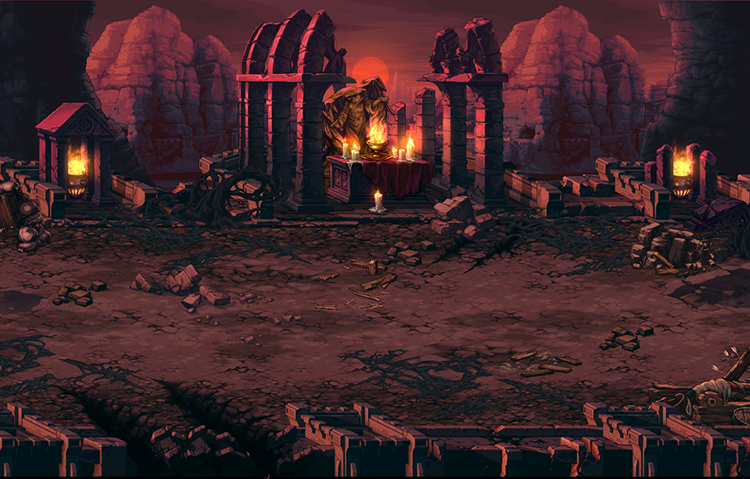 The ruined altar of the god of light that the Pelos Empire worshipped in the past.
Once a sacred ground, it was used by the Three Dark Knights for their ritual to bring back the Extinction.

During the horrendous Black Crusade, the Imperialists couldn't afford to give proper burials for their deceased.
But at least they built this place for them before they moved to the outskirts of their city to avoid Ozma and his army of Imposters.

The first place on the other side of the Chaos Gate.
In the distance stands Elerinon Castle, once known as the Glory of the Pelos Empire, where Ozma is staying in exile.

Corridor of the Dead

The ruins of the corridor called the Path of Penance that once led to the sanctum.
Perhaps it should be called the Corridor of Imposters now since it's fraught with Imposters
who used to be Imperialists, stalking the passages in search of prey.

Gladden the Plain of Ruin

Originally called the Gladden Plain, it was famous for a variety of colorful flowers that bloomed there.
The Black Crusade turned it into a wasteland and soaked it with red blood.
During the war, Wolfgand Beonarr also fought Tiamat here, who murdered his brother, Bareford, and broke one of his horns.

Aventus the Cradle of Despair 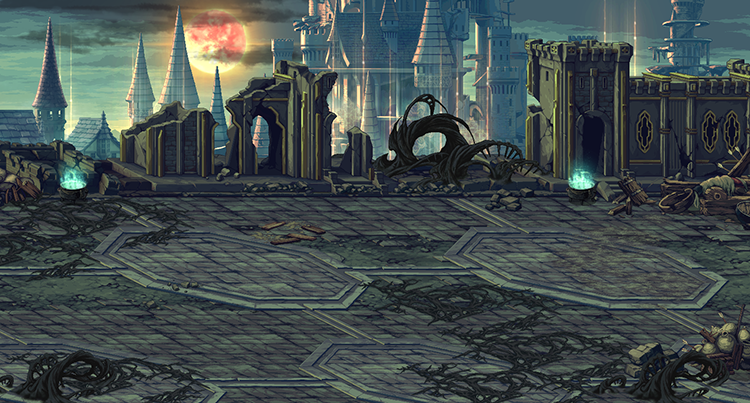 Located halfway through the popular trading route, Phylis Thoroughfare,
Aventus used to be a peaceful village where merchants and adventurers would drop by to relax on their way to Elerinon Castle.
The Black Crusade turned it into what it is now: a ghost town filled with nothing but despair.

Phylis the Path of Despair

Originally named Phylis Thoroughfare, it connected to Elerinon, the prosperous city of the Pelos Empire.
It was used to transport large amounts of goods. During the Black Crusade, it provided Ozma's Imposter army a direct route to the city. 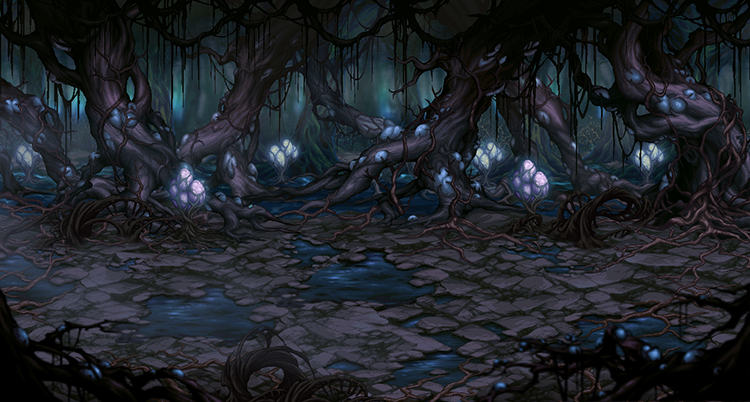 Serha used to be a beautiful lake that provided clean drinking water to Elerinon and the neighboring village, Aventus.
It was turned into this dark, mossy swamp during the Black Crusade, which filled it to the brim with the bodies of humans and Imposters.
It's also called the Grief Swamp because of the numerous lives lost and left to sink to its bottom. 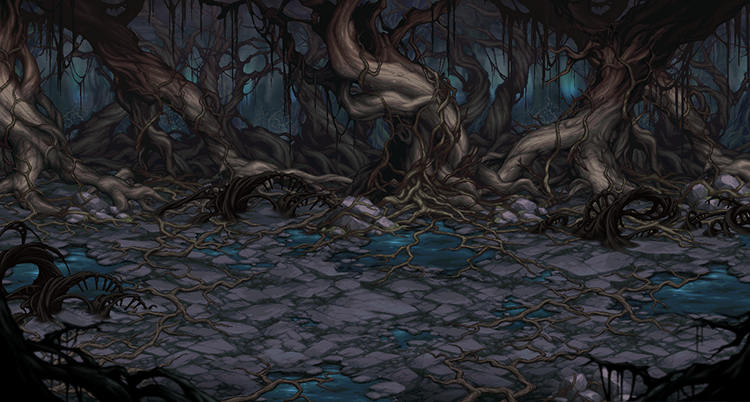 A gateway at the end of Phylis Thoroughfare before the Elerinon city,
standing on the other side of a long bridge called the Bridge of Glory. 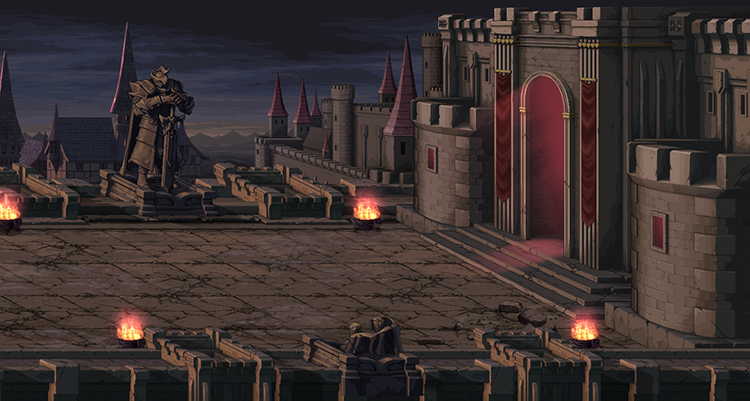 The castle of the most prosperous city of the Pelos Empire.
It was the very first place that Ozma of Chaos and his Imposter army attacked.
It was besieged overnight, and its residents were killed or turned into Imposters by the power of the Blood Curse.

Once the symbol of Elerinon's wealth, Armis was filled with illusions created by the energy of Chaos after the city fell.
Rumor has it that this garden houses something in its depths that Ozma wants to hide.

After besieging Elerinon Castle with his army of Imposters,
Ozma sat on his throne placed on the highest floor of the castle and commanded the Black Crusade.

"The symbol of that weak man who vainly chased after glory and wealth must be destroyed, must it not?" - Ozma 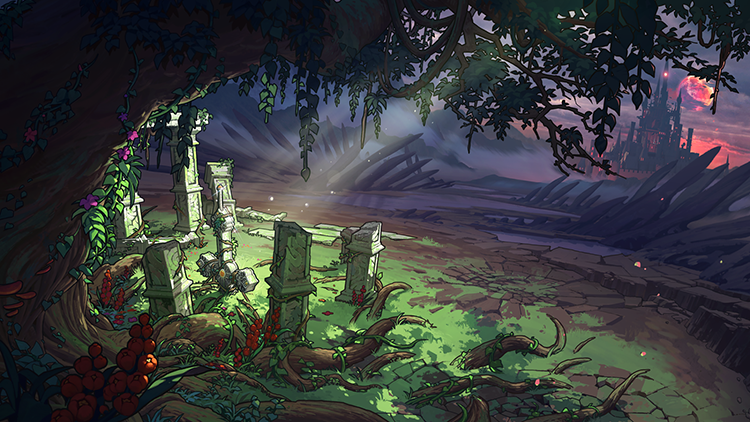 I may perish, but my seeds will remain.
I leave behind small fragments of myself in the midst of cruel destiny.
From now on, we'll exist everywhere in time and space.
We'll escape this storm and travel against the flow,
so we can warn those in the past of that wench's plans.
Our endgame is to twist destiny
and stop the same future from happening.

The seed that had been picked up by the storm floated through the air and reached a land in a different dimension.
It flew across the land as if aiming for a specific destination, which was the ear of the man that it'd been looking for.

The hair-raising voice of a snake rang through his mind. He quietly raised his head without apparent surprise in his face.
The seed, after finishing its words, briefly took feminine form and disappeared.

There was no need to wonder how this seed sneaked past his seal or if its words held true.
The strong sense of revenge that it carried, and moreover, the same sentiment that it shared with him made its desperation and sincerity clear.

"She hasn't carried out her plans so far because..."

He stood up and took off his white hood.
He then stared at the man sitting on the top of the castle far away, tied up to his throne.
A bright light appeared in his hand.

He grabbed and thrust his cross into the ground.
His energy shot through the cross, spreading across the land, instantly growing foliage from the infertile ground.
The cross remained shining brightly,
creating scenery that contrasted with the cursed land around it.
He turned around and walked away.

"Lemidios. Although I've abandoned you as my god, please protect them on my behalf until the day they can destroy Chaos."