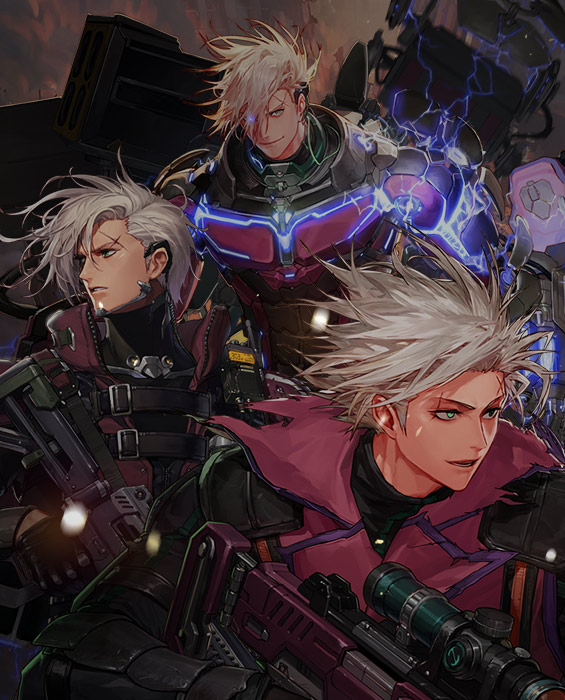 The soldiers who are defeated by Gizel and his TMH unit of augmented men face two possible fates:
they may either die or become the mad scientist's test subjects.

The latter isn't any better than the former.
They only get to live for as long as Gizel is interested in them.

Eventually, he grows tired of them, or their own bodies fail, turning into a useless mass of junk and impotent technologies.
Then, they're left to die in a dilapidated lab in the Galaha Desert of the Western Lawless District.

Blitz fought back against his terrible fate until the end.

Using the abandoned components in the lab and TMH's technologies imprinted on his modified body, Blitz survived.
When he emerged from the other side of this hell, he's become an entirely different type of Gunner.

On the outside, he appears normal,
but he can penetrate enemy lines with lightning speed and subdue enemies with unrivaled strength.
He can also see through his enemies' weaknesses with just a glance.

But every time he moves, sparks fly with a metallic screeching noise,
constantly reminding him of Gizel's curse that's forever marked him.

He refuses to let it bring him down.
He laughs as if to shake it off and continues to pull the trigger at the obstacles in his way of revenge.

Just like he did in that lab where the sun doesn't shine.