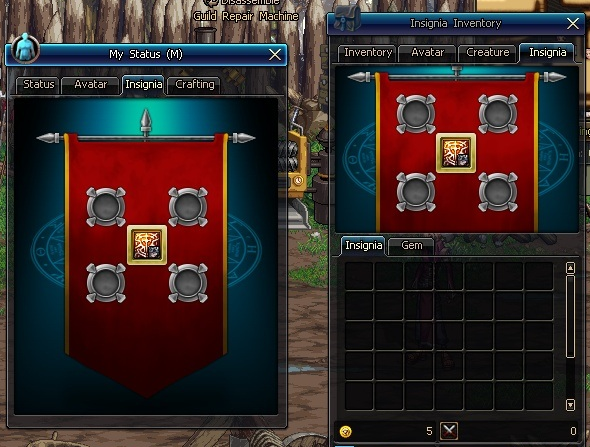 - You can equip up to 4 gems, and more than 1 gem of the same option cannot be equipped.
: If you equip a physical defense gem on the 1st slot, you cannot equip a physical defense gem on the rest of the slots.
- Gem can be equipped to each Insignia.
: For example, after equipping gems on Insignia A, if you switch to Insignia B with no gems, you can equip new gems to the B insignia.
- Equipped gems cannot be retrieved.
- If you try to equip a gem into a slot with another gem already equipped, equipped gem will be removed and the new gem will take its place.
- Gems can be acquired via the routes below.
: All monsters of Guild Dungeons have a chance to drop Gems
: Random gems sold by Courtier Regin
: Gem compounding system will be added.
: You can compound gems via Court Supplier Ande in Guild Hideout.
: You have a chance to acquire Unique level gems via compounding.

- These items are untradeble and can be required via the routes below.
: Some Boss Monsters of Guild Dungeons have a chance to drop
: Sold by Courtier Regin